The Theme of Justice in haiku

I thought I would revisit the subject of justice as it’s always very much at the forefront of world news. Everywhere we look there are either abuses of justice, a blind eye to justice, attempts at justice, and miscarriages of justice. There are people fighting our corner for justice but they are underpaid and few in numbers.

The International Academic Forum (IAFOR), a research organisation based in Japan which encourages interdisciplinary discussion, and facilitating intercultural awareness, approached me to be a judge for their haiku contest on the conference theme of justice. I knew this could be a strong opportunity for people to write about. Actually I seem to remember a number of people not sure how to write about this topic for haiku. But you only have to remember the Japanese haiku writers who stood against Japan entering World War Two.

There is a current craze to watch superheroes on film and streaming video where caped, and sometimes not caped, crime fighters have extra powers, courtesy of DC Comics and Marvel Comics, and other vigilante movies. We sometimes yearn for a fight against injustice that doesnt appear to be addressed by the appointed authorities in our towns, cities, central government. This haiku was influenced by watching one such movie starring Jodie Foster:

vigilante movie
my elbow
heavy on your knee

Here is the original judge’s results: 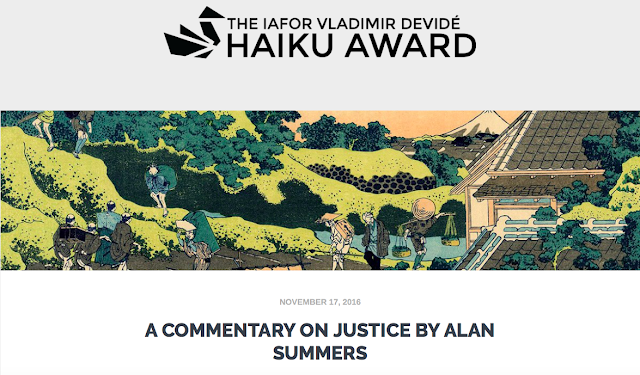 A COMMENTARY ON JUSTICE BY ALAN SUMMERS
NOVEMBER 17, 2016
Writer and poet Alan Summers, Guest Judge for the IAFOR Vladimir Devidé Haiku Award 2016, presents his special selection and commentary on the theme of “justice”.
https://iaforhaikuaward.org/commentary-on-justic-by-alan-summers/

I was delighted to see so many authors use the theme of justice as inspiration for their haiku. There are all kinds of justice – it has its own lexicon of both sorrow and joy, from the victims who barely survive injustices, to those who win the fight for justice. These remarkable haiku showcase various poignant approaches to the conference theme.

Wabi-sabi (侘寂) is a Japanese term that describes the acceptance of imperfection, impermanence and incompletion, manifested in the art of kintsugi (金継ぎ) in which broken pottery is repaired with golden lacquer. These haiku are likened to the golden repairs, in that they represent the acceptance, reflection and celebration of the overcoming of injustice.

We start with an innocuous sunny day and then a shadow, and all seems well. Then the last line jolts us. The shadow is not an innocent passing phenomenon of a bright sunny day, but is instead a more ominous presence on a breast cancer x-ray.
The haiku is well crafted, building up line by line until the reveal, the twist in the narrative, perhaps encouraging us as readers to appreciate every single second of a sunny day.

Red is a potent symbol against the fresh snow. I’m reminded of Steven Spielberg’s film adaptation of Schindler’s List, in which a little girl wears a red coat and everyone else is in monotone. Red against the white snow at first suggests warmth, comfort and safety, which quickly turns to danger for the refugee who will endure winter on cold, unfamiliar ground. The line order of the poem builds suspense and subtle emotional undertones.

This haiku is extremely well crafted and utterly haunting, pared to the bone with just five words. It touches on the war that so many suffer within their own minds, but also hints at despair of the world’s physical conflicts. Many can experience an internal war, even after therapy for treatment of trauma experienced through violence, war or injustice, but this sufferer is exhausted by the fight, both with themselves and with others.

hallowed ground
so many ringtones
among the stones
Earl R. Keener, United States

There is a poignant note to the first two lines, with the suggestion that all those buried in recent years are bound to their mobile devices even in death, and that those mourning are too attached in life to switch off, even on “hallowed ground”. The haiku uses end rhyme, with “ringtones” and “stones”, as well as a strong assonance. For me the “own” sound in “tone” and “stone” makes this more deeply moving. We can’t take the things we own with us into death.

With powerful brevity we are placed into war, almost as a witness, in which justice takes a back seat. The coffin makers are making a living amongst the many dead and mourning, working hard to bring some dignity to the victims. It serves as a reminder that ordinary people, businesses and lives exist in these sites of terrible injustice.

Haiku often feature the human condition in an unexpected way. A subtle “sadness” that isn’t “sad”, or an “aloneness” that isn’t “lonely”, which is so typically Japanese. This is often a keynote in haiku and draws on the universality of experience. Each haiku evoked a deeply poignant response within me, and I hope they do the same for you.
– Alan Summers
The Japan Times award-winning writer, and co-founder of the haiku (and related genres) workshop and event provider Call of the Page.

Call of the Page (Karen Hoy & Alan Summers)
runs online courses, as well as workshops and events from their base in Chippenham, and other places in the U.K.
https://www.callofthepage.org/learning/