The online intermediate haiku course for starting 2017 off with a bang!

LEVEL:  Suitable for those who have already started out writing haiku.

BOOKING: your place is immediately confirmed when we receive your payment via PayPal to alan@withwords.org.uk.

We will confirm confirmation of your payment and place on the course.

If you need further information please contact Karen at: admin@callofthepage.org 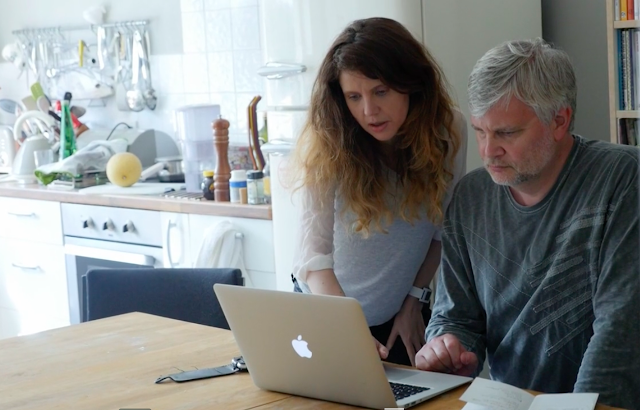 Our Intermediate Haiku Course:
Haiku (plural and singular spelling) are the shortest of all short verses, with an intended arrangement of words to draw on an emotional reaction from a reader. The intention is to create an effect far greater than the sum of the actual number of words used.

“…a haiku often juxtaposes two [different] objects and challenges the reader to make an imaginary connection between them.”
From the Preface viii, Light Verse from the Floating World by Makoto Ueda
Columbia University Press, New York 1999

Traditionally haiku are rooted in the seasons, and half the poem is written by adding a season. But haiku are also ideal for both nature and urban observations, and as a kind of short-hand for remembering events.

Haiku can also make for excellent ecological and environmental writing, as well as being highly therapeutic.

Plus they can also work out both our ‘right’ and the ‘left’ side of the brain which is a useful exercise to help stave off memory deterioration.

Haiku is like a Golden Thread and this course will help you find it throughout our time together.

This haiku course for up to six participants is suitable for those with experience of either creative writing or haiku already. Participants have three sessions over two months where they submit three poems each time (total 9 poems).  In the second and third submissions there is also an opportunity to submit a rewritten poem for further comment.  The course ends with an optional 20 minute phone or Skype chat with Alan to answer any outstanding questions about haiku in general or the student's work.

His latest book Writing Poetry: The Haiku Way is due out later in 2017.

Also available throughout each year is our popular individual feedbacks when you want fast feedback for a magazine or competition, or collection:
One to One Individual feedback Service:
http://area17.blogspot.co.uk/2016/09/expert-one-to-one-individual-feedback.html

Feedback on your haiku on a one-to-one basis at any time, minimum total booking ninety minutes which can be spread over a period of submissions.

If you wish to book a block of hours (for instance for help with editing/creating a collection) then price reductions start with four hour bookings.

Collections with themes:
Themocracy: The Themocrats and their Concept Albums
Four book reviews by Alan Summers of writers who weave theme: http://haikureality.theartofhaiku.com/bookrew69.htm

For Further information please do contact Karen at: admin@callofthepage.org

Call of the Page, formerly known as With Words, will be starting more of its 2017 range of courses based around haiku and related genres later in the New Year/Spring.

Call of the Page, formerly known as With Words.
We have been running online courses in haiku (and related genres) since June 2009, and day schools and residential in-person courses at various venues since 1999.

Alan is Lead Tutor of the new organization Call of the Page, an international provider of literature, education and literacy projects, formerly known as With Words.

Just this January (2017) he became the new President of UHTS: 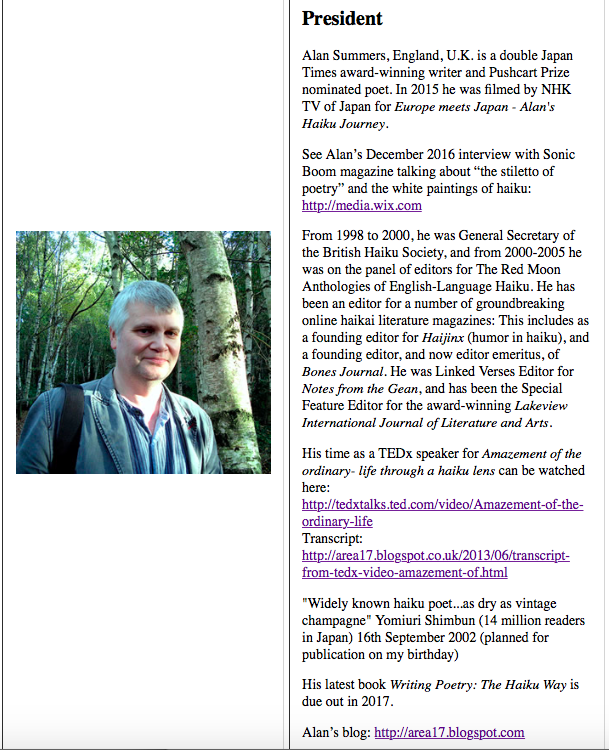 
His latest book Writing Poetry: The Haiku Way is due out later in 2017.