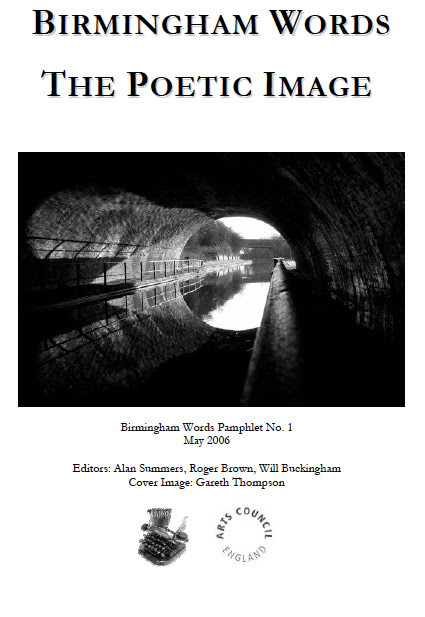 Those images that yet fresh images beget…
W. B. Yeats

Welcome to the first in our new series of Birmingham Words pamphlets.
These pamphlets are a new venture for us, in which we are seeking to publish
high-quality new writing in a format that is accessible from anywhere in the
world.

It has been a pleasure to launch this series with the present collection, The Poetic
Image: Haiku and Photography, and to work with Alan Summers and Roger
Brown, this issue’s guest editors. What makes a poem or a photograph succeed
is hard to put your finger on. But for me at least, a poem or photograph has
the power to open up chinks in my world, to allow in a flicker of light or flame.

This collection of fleeting images will have done its work if even a single image
– whether a poem or a photograph – succeeds in catching fire in your
imagination, leading to fresh insights, new moments of clear seeing.

“Today it may be possible to describe haiku but not to define it.”
Hiroaki Sato: Author, columnist, and editor of “One Hundred Frogs: From
Matsuo Basho to Allen Ginsberg” http://hiroakisato.org

“There are descriptions of haiku as there are stars in the night sky: this is mine.”
Alan Summers http://www.withwords.org.uk

Haiku are possibly the shortest, and the longest regularly written form of poetry in the world. They are of incidents of everyday proportions: whether crossing a busy road: noticing a flower in a crack of concrete; running from a downpour of rain; or just those many episodes in our lives we unknowingly share with people from other cultures and backgrounds.

Haiku can allow you to respond not only as a reader, but as a “co-poet” with the original writer. This isn’t unique to haiku but may equally be one of the defining characteristics of haiku: where we are able to experience within our own lifestyle something that links us all...the piquancy of the moment.

“For me nature is not landscape but the dynamism of visual forces - an event rather than an appearance.” Bridget Riley “Working with Nature” from “The Mind’s Eye” 1973

When I found this quote I immediately thought of Basho and one of his most famous haikai verses (Basho wrote before the term haiku was used). I have visited the place this poem originally related to, but I also feel it is only too universal:

these summer grasses:
the remains of warriors
with their dreams

Haiku are not ‘Nature Poems’ although:

“I try to capture the feelings of "The Fours": in a year – the four seasons; in a month – the four stages of the waxing and waning of the moon; in a day – morning, afternoon, evening, and night.”
Dr. Akito Arima: Minister of Education, Science, Sports, and Culture (1998-2000). Simply Haiku interview October 2003, Vol.1 No.4

I have chosen 12 photographs on the basis of what seemed to me the intention behind making them, their poetics and aesthetic appeal especially with the use of light, the interest of the subject matter and how well these three strands were woven together in a satisfying whole.

Some of the images I admired for their elegant simplicity, others for their more complex significations. All of them I find subtle and richly enjoyable. I hope you do too.

Selected haiku from the collection:

in the dream
they called me brother –
pounding rain

the tremor
in his hand
blue hydrangeas

EARLY MORNING IN THE MIST

Like being in a large bowl, the hills, glaciated, unglaciated, making a ragged edge. Always a bank of clouds rising over them in the fall. Sometimes the cloud cover is so low that the car barely has enough room to squeeze through underneath. If I stopped, I could climb on the roof and haul myself up, run across the tops of the hills, valley and ridge, valley and ridge. Rise and dive, rise and dive.

Girl
(why not)
on a dolphin

fresh earth
on the lifeline of my palm
a tiny worm

winter full moon
the ebb and flow
of her headache


a shy man
half in shadow...
spring sunset

only a pebble
yet nothing can replace it...
the child's pebble

jazz radio –
delicacy of snowflakes
on the keys 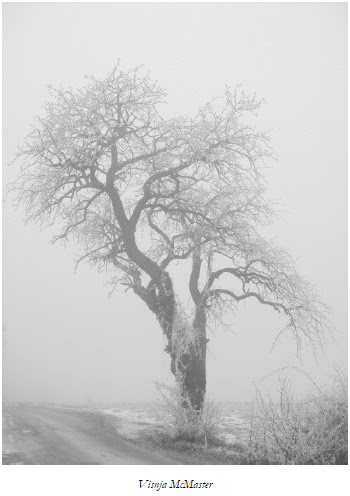 
The Pdf can be received on request at:
alan@withwords.org.uk
The Poetic Image - Haiku and Photography
This collection, guest edited by Alan Summers and Roger Brown, contains work by an international cast of thirty-one poets and photographers, from Birmingham to Brazil, and several points in between - whatever way you decide to travel. 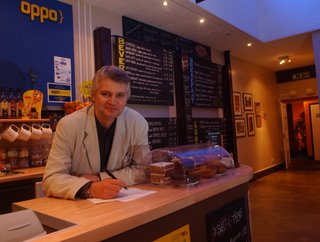 The Oppo} resident poet Alan Summers
inside the bar at 72 Park Street Avenue, just off the top of Park Street, Clifton, Bristol
Photo by: Paul Gillis

Cris Warren visits a Bristol cafe where you will get more than just a coffee.

Poets in residence tend to be the preserve of universities and libraries so it's something of a non-dusty and dry pleasure to find one has set up shop in an airy and relaxed Bristol coffee house equally famed for its food as it is its music playlists. Even better, Alan Summers' poems only last six seconds.

As Oppo on Park Street's house poet, Alan's brief is to teach customers the ways of haiku, the brief but epic Japanese verse form that has adherents across the globe.

"The wonderful thing about haiku," says Alan, "is that it's the world's shortest poem and the world's largest poem at the same time. It works on many different levels and means different things to different people."

"If I spoke a haiku to you, whatever meaning you got out of it would add to my poem. Some poetry can make people feel awkward if they don't understand it because you're supposed to know what the poet is saying. But haiku is about your interpretation of the words, and the space between the words."

The table is strewn with yellow Post-It notes containing three-line musings on nature and cappuccino, written by Oppo customers and posted in the red haiku postbox in the middle of the cafe.

"Once you get the knack," he says in explanation, "it becomes addictive. You start to think in haiku."

"I'd look for blank greetings cards and just write a verse or a ditty for friends' birthdays and the like. I didn't really think anything of it, I just thought they'd throw them away when their birthday or whatever had passed."

Much to Alan's surprise, he discovered that far from filing his cards in the bin his poems were becoming treasured and desirable collectibles among his friends and family.

"It felt quite strange, being collectable - I mean, I really hadn't thought anything of it, but that people liked what I wrote kind of gave me confidence to take things a little more seriously and from that I got into writing haiku."

Or rather, as is the nature of the form, haiku got into Alan. Either way he showed an almost effortless command for haiku and, in a classic case of coals to Newcastle, even picked up a prestigious award for his terse verse recently from the Japan Times.

Now he has an almost evangelical zeal to spread the word through poetry events, blogs on the internet and chance encounters, and he's now haiku poet in residence at the Oppo music cafe on Park Street, a venue big on promoting local arts and music and the perfect place for a spot of poetic reflection between shops.

Oppo customers can, for the price of a coffee, sit down with Alan for five minutes and get a crash course in haiku before graduating to writing their own zen masterpieces, aided and abetted by a latte.

"Haiku is poetry, but it's not and that's why it's so suited to all walks of life. It's something you can spend hours on your own writing, or minutes while you're sipping a coffee."

"I'm not teaching people to write haiku as such, I'm just pushing them in the right direction and showing them the guidelines."

Academic approaches to haiku tend to swaddle it in rules about the correct amount of syllables but, argues Alan, its beauty is in its brevity and space. He also prefers the term guideline rather than rule when it comes to writing haiku.

"All it needs to be is three short lines and the whole haiku lasts six seconds long, no longer. I try not to bombard anyone with too much information, I want people to discover it for themselves and write it their way."

"I don't want people to be bogged down by the rules, I want them to enjoy it."

"It's quite a therapeutic exercise and the sheer range of people who write haiku, from high-ranking government ministers to prisoners on death row, illustrates what a democratic process it is."

It takes a pen and a scrap of paper to get started, but even if you don't have those to hand, the style is so short you could compose them as a text message or just in your head.

Haiku is written in the present tense in everyday language and it works best with two different images that spark off each other. Traditionally haiku is rooted in the seasons of the year, but there's no reason to be tied to this.

It's about trying to find the extraordinary in the ordinary, or even vice-versa, and it's full of senses like sound and taste, touch and smell, not just what you see with your eyes. Take two of Alan's recent verses, for instance.

The thing is that haiku doesn't tell you anything or really even describe anything. It's about letting the reader or the listener enter the poem and have a good look around before making their own interpretation.

As a way of filtering out all the noise of the information we're constantly bombarded with, writing haiku is a way of finding some clarity in the modern age. The trick is not to think too hard about it.

Says Alan: "Haiku brings you back to what's simple but it works best when you're not trying to be clever or philosophical. You have to almost step aside from yourself to write what you feel."