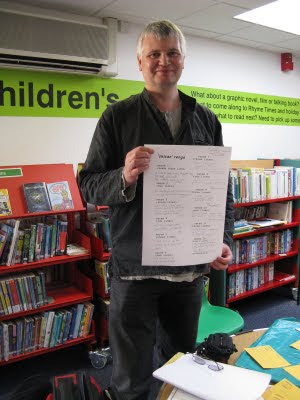 Alan Summers holding the second shisan renga (12 verse group poem of shared writing) that we did with people before the library closed!

June Wentland, BathNES Reader Development Officer and myself travelled to Radstock in order to get a renga poem happening as part of the festival. Little did we know that people would love the idea of renga so much that we would complete two renga group poems!

This was also due to the wonderful, friendly, helpful Radstock Library staff, and nesa people.

Renga is a group poem of shared writing, and great fun!
We were all so pleased with Radstock Library users being so keen to get involved.

L-R: Judy Terry, Radstock Library Manager; June Wentland, BathNES Reader Development Officer; and myself at the end of a long but delightful day!

We just loved all the verses from the public!

This was the second of two With Words haiku related events on Saturday in the South West of England. 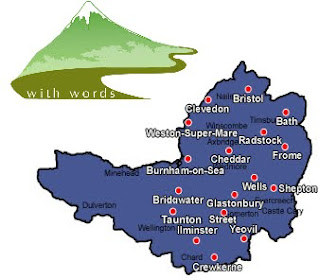 Match the Haiku to the Picture: Bradford on Avon Arts Festival

With Words held a Match the Haiku to a Picture Competition at the St Laurence Street Party*.

Kathy Hogan and Karen Hoy ran the competition and stall while I was away at Radstock Community Festival with Reader Development Officer June Wentland as part of Japan-UK 150 and With Words partnership with Bath Libraries. 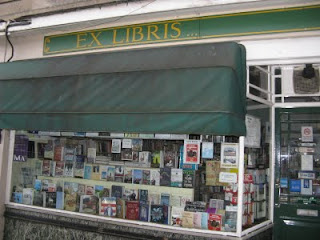 photo by Alan Summers
Our event was sponsored by Bradford on Avon's own fantastical independent bookshop Ex Libris!


*St. Laurence Street Party
"A festival within a festival: Bradford on Avon comes alive with haiku, music, dance, food, drink, stalls and entertainment for every age!"

Kathy and Karen and festival goers sharing a joke. 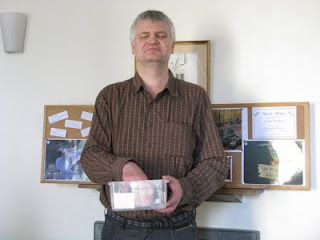 Forty five people entered our competition where they had to pick five out of ten haiku that matched five photographs. Out of those forty-five forms handed back we had nineteen correct forms so I had to pick out an overall winner! 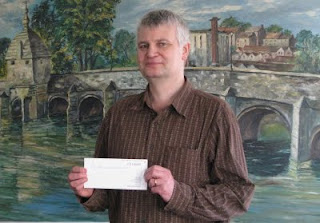 I'm holding up the Ex Libris book voucher, and behind me is a painting of Bradford on Avon that hangs in the big room next to our little office in town. 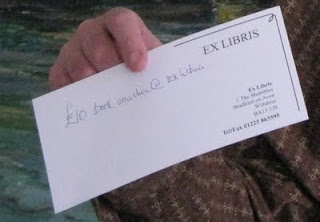 Match the Haiku to a Picture Competition was sponsored by Ex Libris, Bradford on Avon's own fantastic independent bookshop. 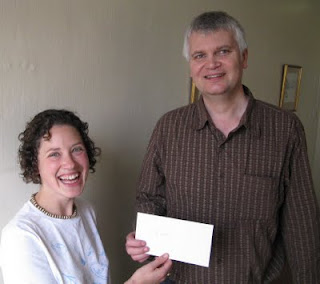 Emma is a nurse at Bath's A&E Department, a very deserving and enthusiastic winner.

Emma is going to enjoy taking her time deciding which book to buy at Ex Libris as it will be a great excuse to pick Jim's brain about 18th Century novels. Jim runs the always sell out Literary Quiz in the Bradford on Avon Arts Festival. 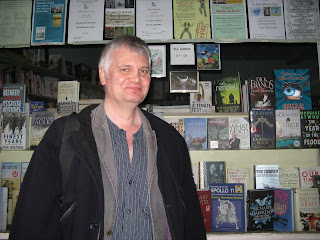 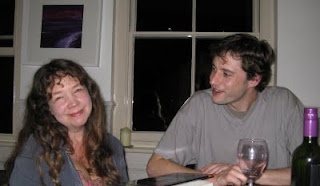 We had a terrific bunch of people, some local, some from out of town as far afield as Corsham and Nailsea if you exclude two Americans who fell in love with the West Country years ago.

What is FAVOURITE WORDS what is a Slam!?
It's like a poetry slam except you only have to perform a single word that you might just adore and didn't even know it!

Or it could be a word you are fascinated by, or a word you absolutely hate but need to get that fact off your chest, because you just have to say it!!! 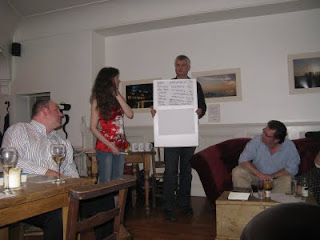 Alan's spelling is rubbish, and his favourite word!

All this in a fun filled laid back three-round event, where you are invited to share these mad cap fab favourite words of yours!

During the breaks we ran little word games with daft prizes! 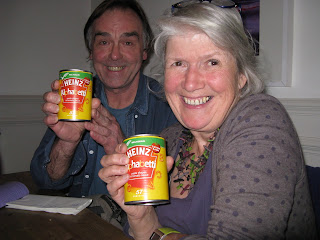 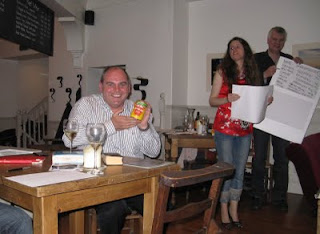 Bob, Jane, and Damien seem delighted with their Alphabet Spaghetti!

Every round, the audience can vote for the word that got them laughing, or philosophical, or just plain confused!

The audience have fun putting people through they love or hate so they have to say another word for the second round, and yet again if you get through to the third round!

Even though it was an individual game people enjoyed giving each other support.

So have three words ready just in case you get through to the final!

You don't have to be a "writer" or a "poet" to take part and really enjoy this.


Dictionaries are available on the night, but you'd better start thinking now to be in with a chance of winning decent 1st, 2nd or 3rd prizes!

2nd and 3rd Prizes of With Words Haiku Mugs went to Tom from Boston U.S.A. and David from Corsham. 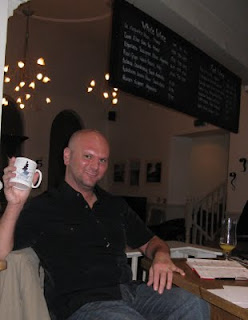 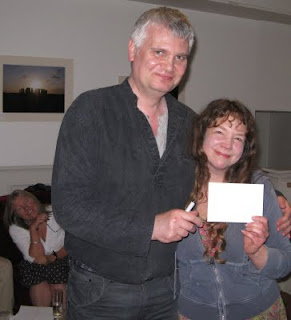 Tracy wins a fine voucher from our Favourite Words sponsor "Wild Mary Ellis"
A lovely new business just opposite the With Words office offering Holistic Beauty and well being at 5 Market Street, Bradford on Avon, Tel. (01225) 866470
_ 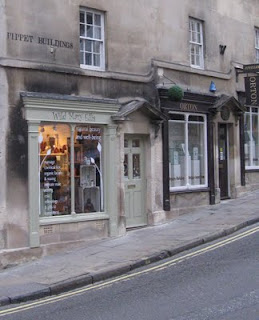 USEFUL FESTIVAL INFORMATION
The map of Bradford on Avon:
http://www.theartsfestival.co.uk/information.html#Venue
On the map, Fat Fowl is "L"

TRAINS TRAINS TRAINS cars cars!
BRADFORD ON AVON RAILWAY STATION
(about 5-7 minutes away from the Fat Fowl
and ample parking if coming by car):
http://en.wikipedia.org/wiki/Bradford-on-Avon_railway_station 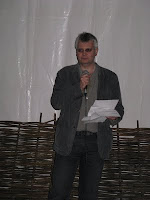 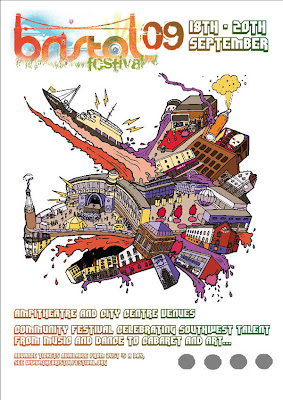 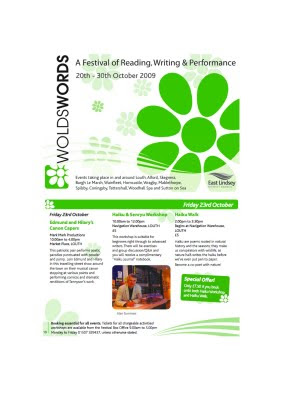 NOTE:
Please click onto the above image for a larger image.

Booking is essential for all events.


EVENT #1
Haiku & Senryu Workshop £5
10.00am to 12.00pm
Navigation Warehouse, LOUTH
http://www.louthcanal.org.uk/warehouse.html
This workshop is suitable for beginners right through to advanced writers. There will be exercises and group discussion/Q&A and a complimentary Haiku Journal notebook.
*Special Offer:
Only £7.50 if you book onto both Haiku & Senryu Workshop and Haiku Walk.

EVENT #2
Haiku Walk £5
2.00pm to 3.30pm
Begins at Navigation Warehouse, LOUTH
http://www.louthcanal.org.uk/warehouse.html
http://www.louthcanal.org.uk/geography.html
"Haiku are poems rooted in natural history and the seasons; they make us conspirators with wildlife, as nature half-writes the haiku before we've even put pen to paper. Become a co-poet with nature!" Alan Summers
*Special Offer:
Only £7.50 if you book onto both Haiku & Senryu Workshop and Haiku Walk.

A hint at the kind of scenery, full of rich haiku possibilities, we might come across! 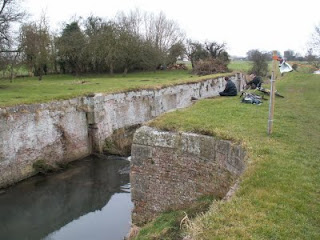 Image by Leew (30 September 2006)
Picture: Remains of a lock on the Louth Canal at Alvingham Leew's statement: "I, the copyright holder of this work, hereby release it into the public domain. This applies worldwide. In case this is not legally possible, I grant any entity the right to use this work for any purpose, without any conditions, unless such conditions are required by law."
Posted by Area 17 at 2:33 pm 3 comments:


Alan Summers introduces Roberta who will read haiku from 'nothing left to say' her new chapbook, edited by Michael Dylan Welch; and from her Poetry Society of America "William Carlos Williams Award" Finalist haiku collection "The Unworn Necklace" published by Snapshot Press. There will be micro-open mic opportunities as well! 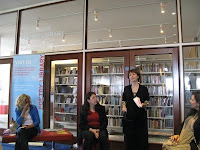 The first photo is of Roberta giving fascinating insights into her own life as well as haiku in America. The second photo is when we caught up with Mike Keville who took this amusing picture when I invited a lovely couple we didn't know to pose with Roberta Beary, Annie Bachini, and Matthew Paul as well as myself. The couple had apologised for getting in the way so I just had to include them in the picture! They also happen to be REAL cockneys born within the sound of Bow Bells!

Haiku Post-its with single insect-themed haiku or senyru on them were left strategically by Roberta Beary, and other haiku poets at various places for the passing public to discover. 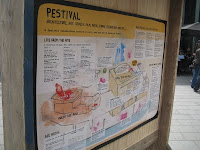 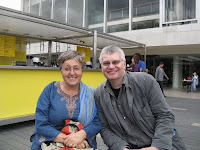 in and out
of the lovers' quarrel
fireflies

convolvulus
a word on my tongue
and the bumblebee