End of the Year: The Comfort of Crows – a haiku collaborative!

Hifsa Ashraf
The idea of a collaborative book came around at least as far back as September 2018 when Hifsa revealed a series of fantastic and startling illustrations that caught the spirit and energy of crows.

Hifsa is from Pakistan. She is a multilingual poet who writes poetry in English, Urdu, and Punjabi.

Many thanks to Chrissi Villa and Shloka Shankar of Velvet Dusk Publishing!
https://www.velvetduskpublishing.com/about.html


Thrilled to have blurb from:

Anna Maris writes haiku in Swedish and English. She is the chair of the literary section of the Swedish Author’s Union and a board member of the Swedish Haiku Society. She teaches haiku in schools and has a haiku circle at the temple of Yangtorp in the South of Sweden. Anna has won many awards for haiku, senryu and renku. Her bilingual single collection Lifedeathetc (2016) is published by Red Moon Press. She has two earlier haiku books, published in Swedish. Her work has been included in numerous anthologies, including A New Resonance 11. She is currently employed as a journalist and media trainer in Sweden and Ukraine.
https://annamaris.wordpress.com/haiku/

Kris Tsujikawa
Delighted that the "crowtojournalist" gave us a great blurb as she really knows about crows, and her feedback as blurb was crucial.
https://twitter.com/kris0723

John Stevenson
A former President of the Haiku Society of America, and former editor of the HSA journal, Frogpond, one of the oldest and most widely circulated journals of English-language haiku. He is the Managing Editor of Heron’s Nest, while his own haiku have won awards in innumerable competitions. He is co-founder of the Route 9 Haiku Group, which creates the Upstate Dim Sum journal. He is one of the most highly regarded living haiku poets in the world.
http://www.americanhaikuarchives.org/curators/JohnStevenson.html

Alan Summers
And of course Alan Summers and the catalyst for the illustrations, and finally a collaborative collection around crows, and helped by crows!
http://area17.blogspot.com/2015/05/dark-news-story-of-crows-and-how-simple.html

Alan Summers is also co-founder of Call of the Page along with his wife Karen Hoy:

And if you want to know about monoku:
the one line haiku:
https://www.callofthepage.org/courses/haiku-courses/one-line-haiku-new/

Merry Christmas and Winter Festivities around the world from Sam the Lurcher, honorary haiku dog and haiku god! 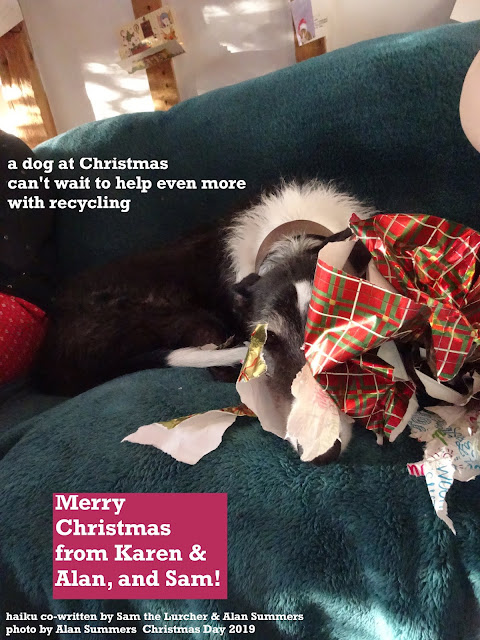 Karen, Alan, and Sam, honorary member of Call of the Page all wish you an incredible rest of the year, and into 2020!

Call of the Page poetry courses for 2020!
https://www.callofthepage.org/courses/