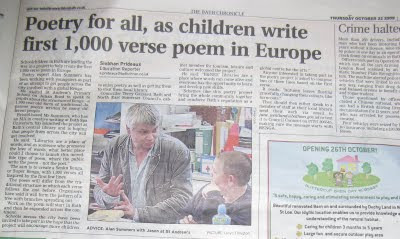 Be involved in this unique ground-breaking project!
Everyone from Bath (and BATHnes) and the Rest of the World are welcome to send a renga verse.

Just send a two or three very short line verse, or ask us to send you a verse to link to!

txt from outside the U.K.?
WEBLINK: World Phone Codes

Just two of the many renga sheets and renga verses coming in from local people and from around the world:

.
The Renga Project
.
has now reached over 1000 verses
and is now extended right up to Christmas.

We urge you to help us create a super poem that is jointly written by the public and local, national and international poets.

We believe this super renga will stand as an extraordinary social document, as well as a riveting poem, all at the same time.

Competition
A competition is also being planned for the best verses in various categories: poets local and international; the general public; and from children.

This is a unique project drawing experienced writers and international haiku and renga poets and their contributions together with from the general public.

As the Japanese Embassy roving "Japan-UK 150" haiku & renga poet-in-residence currently based at Bath Central Library (situated upstairs in The Podium Shopping Centre) and in partnership with Bath Libraries from June to December 2009 (and New Year 2010), I set a challenge starting on National Poetry Day in October for the residents of Bath and North East Somerset to create the world's longest poem using the renga form of poety (see below).

This project becomes more than a poem, it allows people to reveal aspects of their life, their worries, their fears, it creates a unique time capsule for the residents of this area:

and with verse contributions from all over the world from people who do care about people beyond their geographical boundaries:

Bath Chronicle: Councillor Terry Gazzard, Bath and North East Somerset Council's cabinet member for tourism, leisure and culture said: "B&NES' libraries are a place where words can come alive and everyone has the opportunity to learn and develop new skills. Schemes like this poetry project bring the whole community together and reinforce Bath's reputation as a global centre for the arts."
Bath Chronicle quote me:
"Libraries are a place of words, and as someone who promotes the love of words, what better place could I choose to launch this incredible type of poem, where the public write the poem – not the poet."
I also want everyone to join in with this totally inclusive group poem!

Email ThisBlogThis!Share to TwitterShare to FacebookShare to Pinterest
Labels: Japan-UK 150 haiku and renga poet-in-residence, renga, The 1000 Verse Renga, With Words in partnership with Bath Libraries

haiku published in the 2010 Haiku Calendar 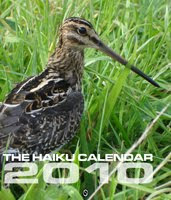 image©Snapshot Press
.
“Don’t think that calendars are just for keeping the dates straight … If you were only interested in excellent haiku from this choice of international authors, this would be an exotic addition to your bookshelves, even when the years have passed beyond this one.”
Lynx (USA)


I'm delighted to be able to say that two of my haiku are to be published in the terrific Haiku Calendar for 2010!

The first lines of each haiku:

This year 768 entries were received from 104 entrants residing in 14 countries across 4 continents:

As ever, in the initial stage of adjudication each poem entered faced one simple criterion – its quality as a haiku. The shortlisted haiku were then judged according to their originality and relevance to their assigned months, particularly with regards to seasonal references.

With 52 haiku by 37 authors, the resulting 2010 calendar continues a rich tradition exploring and celebrating the continuing relevance of seasonal references in English-language haiku.

Many thanks again to all entrants for making both this contest and the calendar a worthwhile, and ongoing, experience. I would like to congratulate all the winning poets, and hope that their haiku will be widely appreciated throughout the coming year.

To Order Now
The Haiku Calendar 2010 can be ordered online or by mail order.

Please email us at: info@withwords.org.uk
for any enquiries


Current 2012 events are posted, or will be posted over the coming months.


Thank you for your great support!

The group will share memories and anecdotes, and then encapsulate them in short, separate, pieces of writing. With different themes each day, the course will provide structure for experienced writers,
and gentle encouragement to beginners.  There will be plenty of ideas to take away for future memoir writing.

COURSE LEADERS:
KAREN HOY has a Diploma in Creative Writing from Bristol University, and is a published writer of poetry and non-fiction.

She was Highly Commended in the BBC Wildlife Magazine Nature Writer of the Year Competition 2009, with a nature memoir essay, but enjoys all sorts of triggers for her memory writing.

Karen also works as a Development Producer and Writer for factual television.

ALAN SUMMERS has an MA in Creative Writing from Bath Spa University.
He is widely published, a specialist in short-form literature, and an experienced workshop leader.  Alan is the founder of With Words, an organisation that promotes the love of words. He is currently working with Hull Council on a major literacy event based around Hull Libraries and the rest of the city.


The History Centre arcade café
I will be in the cafe from 10am - 4pm, so please join me for a coffee if you can, for a chat and even a renga verse or two.


We would love to hear from:
* people living in Hull or just outside.
* people who were born in Hull but now live elsewhere in Britain
or the rest of the world
* people who have either worked in Hull or have spent a holiday there.

Hull is a glorious city, where despite its poverty levels, has possibly the most friendliest people in Britain.

Part of the Super Renga Project is to promote both the amazing work carried out by Hull Libraries for its people, and to show that Hull is city worth visiting because there are few places left where you can spend a much needed holiday or short break without being pestered as a tourist.

If you feel you can't write a renga verse of 2 or 3 short line duration, please do send an anecdote or brief account of your time spent in Hull. 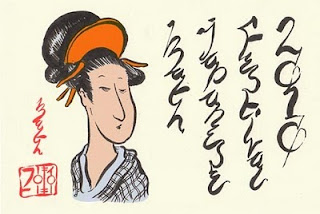 Enter the world of Japanese poetry:
immerse yourself into the ‘quietnesses’ of haiku while weaving the haiku technique into your writing.

Here is a little taster of what we'll be enjoying during the residential course:
The course also includes an insight into other 'forms' associated with haiku:


Haiku is a relaxing way of noting the ordinary moments in our lives, and with a complimentary Haiku Journal, you can become part of the Haiku Way.

This is our second residential course at Claridge House by the way.

After such a successful week last year both Claridge House, the students, and myself and Karen decided to have this second residential in 2010, and the food is incredible, and all diets covered too!


"I loved the week and am thoroughly inspired by you and Karen.  Thank you so much."


2009 comments:
"Just to say that I have heard from the magazine you suggested and they have accepted my story and will publish and want more. Thank you."
(National magazine)

“You are a great teacher, and I know what I'm saying. Thank you for everything you gave us.”

“…still on a high…you helped me move past a real boulder I had been lugging around…I am very grateful and enjoying my writing much more.”

“Anyone lucky enough to write a renga with Alan will certainly learn what words can do."

Enjoy the beautiful surroundings, and as haiku are often written with a seasonal reference, and contain natural images, be inspired by the nature right outside Claridge House.
There will be plenty of opportunity to have one-one and/or group feedback on haiku and other forms that you wish to either get to publishable quality, or wish to develop further in your writing as a novelist; travel writer (and other non-fiction); a journal/diarist; or poet.

Ffi and the renga we did for Red Nose Day: Residential Course

SOLD OUT!
Both days including Saturday night poetry event (150 bookings!)


The University of Bristol Centre for Deaf Studies and the Centre for Personal and Professional Development, in association with Scream Bristol, and Action Deafness Books, are pleased to announce the second Sign Poetry Festival.

Workshops are free and will explore different areas of sign language with the Japanese arts of haiku and renga.

Poetry workshops are open to members of the Deaf community (age 18+) and will be in British Sign Language. A simple lunch will be provided.
Please email donna.west@bristol.ac.uk if you would like to book a place.

"I have heard nothing but great reviews. You were a great asset to the Festival programme."
Katie-Louise Holden, Assistant Arts and Events Officer


This workshop is suitable for beginners right through to advanced writers. There will be exercises and group discussion/Q&A and a complimentary Haiku Journal notebook.


EVENT #2
Haiku Walk £5
2.00pm to 3.30pm
Begins at Navigation Warehouse, LOUTH
http://www.louthcanal.org.uk/warehouse.html
http://www.louthcanal.org.uk/geography.html
"Haiku are poems rooted in natural history and the seasons; they make us conspirators with wildlife, as nature half-writes the haiku before we've even put pen to paper. Become a co-poet with nature!" Alan Summers
*Special Offer:
Only £7.50 if you book onto both Haiku & Senryu Workshop and Haiku Walk. 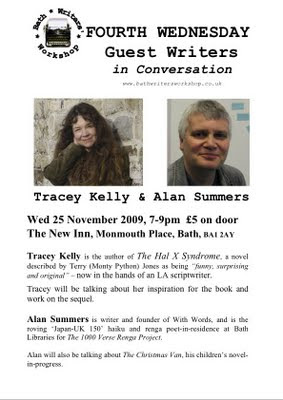 Tracey Kelly is the author of The Hal X Syndrome, a novel described by Terry (Monty Python) Jones as being “funny, surprising and original."

Tracey will be talking about her inspiration for the book, now in the hand of an L.A. scriptwriter, and work on the sequel.

Alan Summers is writer and founder of With Words, and is the roving ‘Japan-UK 150’ haiku and renga poet-in-residence at Bath Libraries for The 1000 Verse Renga Project.

Alan will also be talking about The Christmas Van, his children’s novel-in-progress. 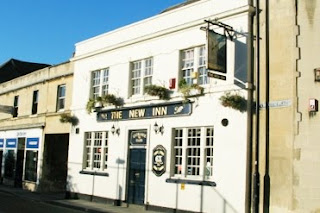