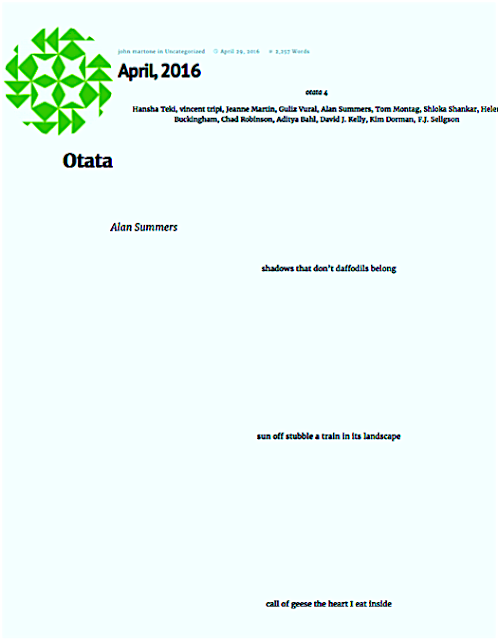 sun off stubble a train in its landscape

A number of books by John Martone are available from:
Posted by Area 17 at 5:11 pm No comments: 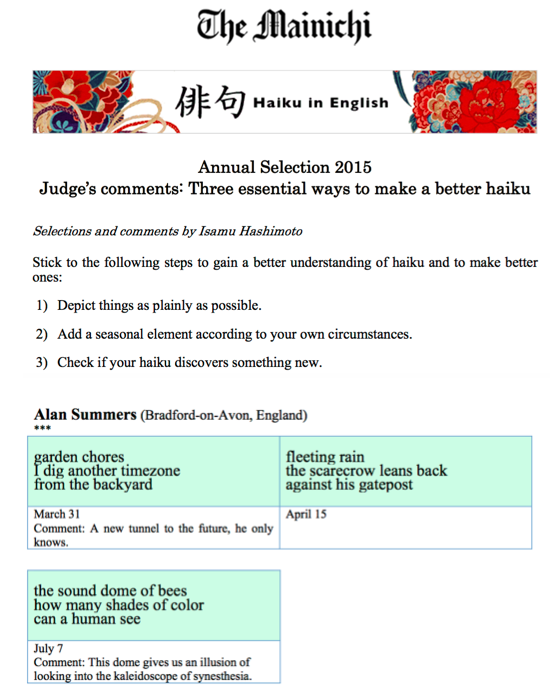 Full explication of this remarkable haiku

I’m very proud of being one of the founding editors of a cutting edge online magazine that first published this fine one line haiku.

This social conscience/science/industry based haiku carries on from Japanese haiku writers such as Yamaguchi Seishi when the industrial revolution was taking hold:

Up to summer grass,
wheels of a locomotive
coming to a stop.

To the result that a second world war took hold, and post-atomic bombed Japan’s struggles were recorded by Tohta Kaneko, influenced by Issa, combining the nature of Issa with the nature of his ongoing contemporary society:

This haiku is about the horrific aftermath of WWII Japan suffering atomic attack radiation in some parts, and food shortages and extreme poverty across Japan. Pickled radish is very loud when chewed, like bones being crunched, and human bones were disposed of in the sea. Hunger, and no choice but to dispose of so many bodies, became an unforgiving duet of death and informed much of Kaneko’s post-war work.
The G-force of Blue | Touching Base with Gendai haiku by Alan Summers
Lakeview International Journal of Literature and Arts Vol.1, No.1 February 2013

And then we come to someone like Melissa Allen who brings aspects of both industrial revolution; post-war society invention; and its consequences, which continue to enfold with the Fukishima incident, where nature is stronger than man’s incompetence.

We have entered man-interfered nature on a great scale, and while the planet is safe whatever happens, and many of the other basic animals, we tread foolishly if we do not take note.

The haiku is one straight line of seven chilling words that technically encapsulate the autumn kigo (seasonal reference) of the moon; a season for visiting past relatives and family at graveyards, and harvesting the fields which are turned on their heads bringing forth a last century danger right back into the new century we are now precariously starting off for our children.

Brevity, a powerful tool, as haiku are like shorthand notation; memes; memos; minature prayers; and mantras; all not easily forgotten, and as well, it’s eco-writing that has moved on from nostalagia to a wake up call.

We cannot contain the radiation leak from this Fukishima multiple incident of nature and faulty construction.  Moonlight will reveal as much as direct sunlight will on how those fuel rods have not held up: Neither has the sandbags both pitifully literal defences in the early stages, as well metaphorical tags for one lack of insight after another.

We all scurry under moonlight, in our daily routines, at our peril, at risk from neglected foresight and hindsight that will never be 20/20 vision, and the poet will seek us all out.