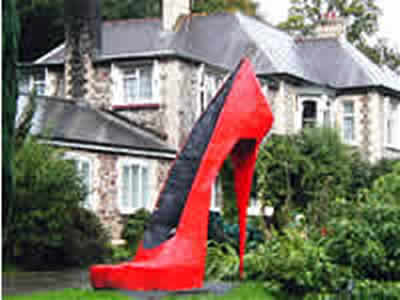 The renga (singular and plural name) will be published in highly regarded magazine Notes from the Gean:
www.notesfromthegean.com

Broomhill is just north of Barnstaple in North Devon, England. 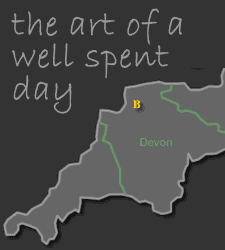 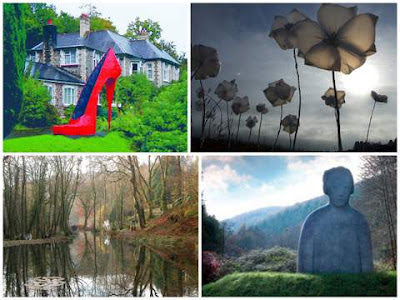 images from: http://www.thegardeningwebsite.co.uk/sculpture-c9176.html
Where to find Broomhill Arts Hotel:
http://broomhillart.co.uk/information/findingus.html

What they say about Broomhill Arts Hotel:
http://broomhillart.co.uk/information/what-they-say.html

Contact and information details for the Broomhill Arts Hotel:
http://broomhillart.co.uk/information/contactus.html

For any other information please don't hesitate to contact me at:
alan@withwords.org.uk 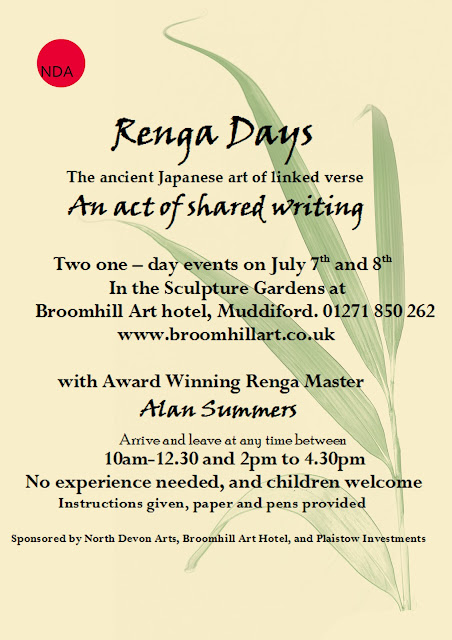 Alan Summers Honourable Mentions for haiku in the Best of Mainichi Shimbun, Japan

I didn't get round to submitting often to Mainichi Shimbun aka Mainichi Daily News in 2011 so it was a delightful surprise when I received two Honourable Mentions selected by the (Tokyo) Museum of Haiku Literature's Isamu Hashimoto:


Isamu Hashimoto:
All the passengers must be afraid of a delay. The train continues to run along the steep precipices under the rain clouds.


netsuke...
the hare with amber eyes
jumps back in again


Isamu Hashimoto:
Netsuke (small Japanese art sculptures) are attached to purses as stoppers. They are valuable and are often made of ivory or chased gold.

The Haiku Course in Poetry and Art: 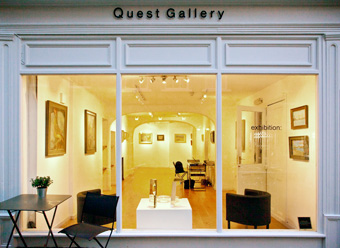 The Haiku Course at The Quest Gallery
Japan Times award-winning writer Alan Summers has joined with Quest Gallery to develop a unique Haiku poetry course. Each session will be developed in response to the changing exhibitions at Quest Gallery, providing a unique and inspiring environment for learning.

Over the course of 5 weeks, students will experience the fundamental principles that underpin haiku, and apply these to their own poetry that they will develop and refine throughout the course.

This is a unique opportunity to learn about Japanese poetry, and contemporary art, in the beautiful setting of one of Bath's most prestigious art galleries.

The course includes an event with special guest speakers where students can showcase their own work. There is also the opportunity to contribute haiku to the exhibition catalogue, producing a creative legacy for for both participants and for the gallery.

Wk 1. The Golden Ratio of Art through Haiku
Wk 2. Hemingway's Shoes and Mono no Aware
Wk 3. Wabi-Sabi and Haiku
Wk 4. The Gentle Whispers of Haiku
Wk 5. The Brightness of Balance in Haiku

Places are limited so book early to avoid disappointment.

For more details about booking on any of these courses, please don't hesitate to email or contact Sarah at the Quest Gallery on 01225 444142 or email sarah@questgallery.co.uk 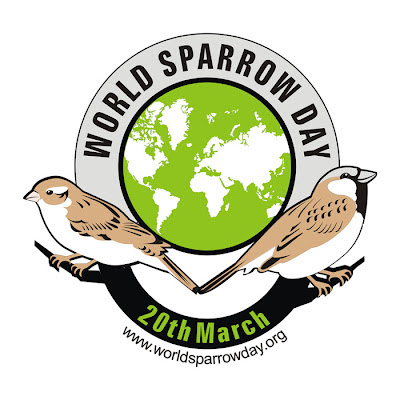 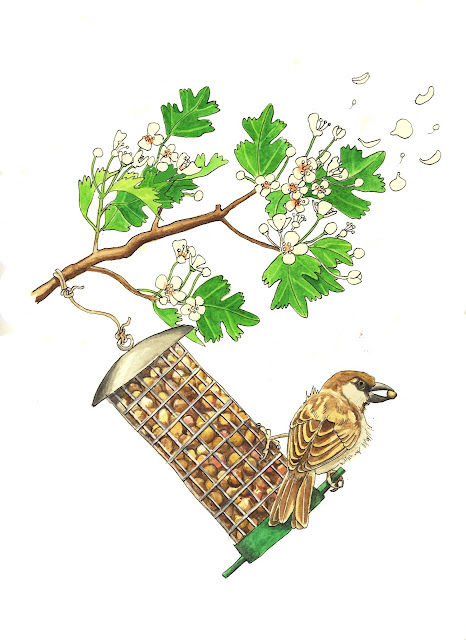 little sparrow
I regret nothing
flowers in the wind


turn in the weather . . .
a house sparrow sings
like buddha

summer wind
a sparrow re-rights itself
at the peanut cage 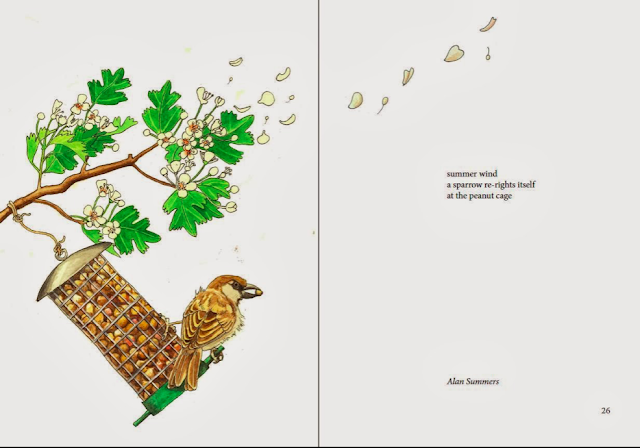 The World Sparrow Day (WSD) is not just a one-day celebration of the ubiquitous, but fast-disappearing sparrow, but an attempt by us to bring sparrow lovers and nature supporters on a common platform, and kick off a conservation movement to save the common flora and fauna of the world.

While commendable attention has been paid by experts as well as the government to conserve endangered and exotic wildlife species like the tigers and elephants, common animals, birds and plants suffer a bleak future due of general neglect and oversight.

The pace at which our immediate environment is degrading, our common species may find their way into the endangered list before we even know it. Spreading awareness about the significance of common birds, animals and plants at this juncture is very important.

Bearing this in mind, our theme for WSD this year is called ‘Chirp for the sparrow! Tweet for the sparrow!’ This is a call to you, our friends across the world – individuals, institutes, companies and experts – to spread the word to save the sparrow and other common species. You can do it easily, by using your everyday communication devices: your mobile phones, emails, telephones as well as sharing thought on websites, social networking sites, blogs and every other possible platform.
What you can do?
* Make the WSD logo your profile picture and the WSD website your homepage.

We encourage you to make the WSD logo your profile picture on social networking sites (like Facebook, Twitter, Orkut, etc.), as well as your messenger and chat accounts. Make the WSD website (www.worldsparrowday.org) your homepage on your personal computer.

You can also use our photos on social networking sites circulate them as emails and request people to participate in our cause. We request you to include our logos in all your WSD related messages, activities and information materials. You can download the logos and limited images free-of-charge from the Nature Forever Society website since they have been produced for the sole purpose of spreading awareness of the day.

* Donate your profile photo to WSD
You can also donate your own photographs to help us spread the message on the WSD event.

We request you to write blogs on the need to conserve sparrows and other common species of birds, animals and plants!  Saving common species of flora and fauna is as vital to the ecological balance of earth as conservation of endangered species. Or else, considering the pace of degradation of natural resources, it won't be long before the common species become endangered. (A case in point is the Indian Vulture: a once widespread species now on the brink of extinction).

Your blogs, highlighting this fact, will help and guide millions of like-minded people across the globe to join our movement.

Use your mobile phone to send SMS, informing people to join the worldwide WSD movement on March 20, 2011. You can also send emails to your friends, acquaintances and professional contacts, spreading awareness to join this cause by doing their bit. You can direct them to visit www.worldsparrowday.org for more information.

* Share your story
Have a real life story, an essay, a fable, a fiction or a poem on the sparrows? You can post them on our Facebook group.

* Take out a sparrow procession

This may be one of the best ways to raise awareness on WSD. Take groups of school and college students, animal lovers, homemakers and general enthusiasts on sparrow processions. Kids are the future of our nation, and their involvement is vital in reviving the population of sparrows as well as conserving the ecology.

WSD activities can take place both indoors and outdoors. Schools, parks, town halls, education centres and nature reserves are all places where events can be hosted. Interesting outdoor activities like bird watching tours and educational workshops as well as indoor programmes like dramas, festivals, exhibitions, painting and photo competitions will raise awareness. Bird watching is a fun way of making children identify and relate with their natural habitats. It will help raise overall awareness on the issue and help us find possible solutions to reduce the threats facing sparrows.
For older students, indoor programmes like drawing and painting competition on the theme "Chirp for the Sparrow! Tweet for the Sparrow!" can be organised by housing societies, schools and colleges. Students can also be asked to make creative posters on sparrows and their habitats.

For school-going students, drama and poetry competitions with references to the barriers to conservation and how to overcome them, may be organised.


We request all nature lovers and mindful citizens to join with us and CHIRP FOR THE SPARROW! TWEET FOR THE SPARROW! A small step by you will go a long way in spreading the message on sparrows and the need to save them.

The common sparrow -- found across Asia, Europe and Africa, in urban as well as rural landscapes -- is a true blue symbol of the ‘beauty of the ordinary’ and we have been celebrating this diminutive bird with a string of awareness and conservation activities, culminating into the World Sparrow Day on March 20, since last year.

This year, our annual World Sparrow Day event will reinstate the significance not only of the sparrow, but all the common birds and biodiversity which are often overlooked and abused by virtue of being too commonplace.

Initially called the World House Sparrow Day, this international initiative was launched in 2010, by Nature Forever Society, in collaboration with the Eco-Sys Action Foundation (France), Avon Wildlife Trust (UK) and some other national and international organisations.

In 2011, respecting the views of a large number of bird lovers and environment enthusiasts who wrote to us, we decided to expand our sphere to celebrate not only the house sparrow – but the 26 species of sparrows found across the globe.

Interestingly, in one of its firsts, Nature Forever Society will soon showcase exclusive photographs and information on as many as 22 of the 26 species of sparrows on its website www.natureforever.com and the dedicated interactive website www.worldsparrowday.org.

We are among the first organisations in the world to have collected such a wide range of photographs of the sparrow species – many of which are elusive and not as conspicuous as the house sparrow. We believe that this effort, in itself, is a feat worth celebration.
Posted by Area 17 at 4:30 pm 1 comment: 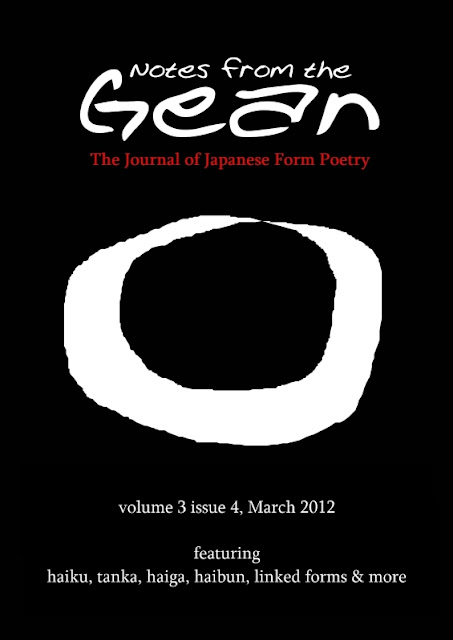 www.notesfromthegean.com
The new flip format works on all browsers and platforms and devices. We have an interactive table of contents and full search facility. Readers also have the option to print, download, or add annotations.

Featuring some of the best haikai literature and tanka around the world; special features on what makes a haiku poem; and reviews of books from The New York Quarterly's Yu Yan Chen; and Croatian poet Tomislav Maretic; plus my interview with Jack Galmitz.
This was said of Jack Galmitz:

With much talk of haiku needing reconceptualization and/or reform, it is ironically refreshing to find an approach that relies much on the imagination while at the same time being grounded in classic poetic devices to potentially reinvigorate the English-language canon. Jack Galmitz’s haiku poetry steps far outside the humdrum of what I’ll call, “the haiku template.” 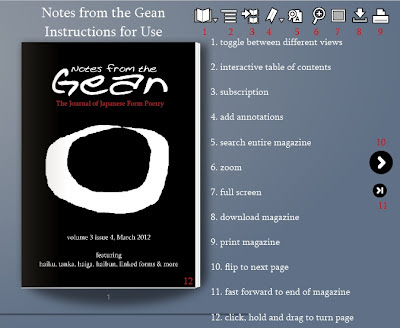 If unfamiliar with this format please do click onto the image to enlarge in order to make note of the special features.
Posted by Area 17 at 8:15 am 1 comment:

The Tanka Journal Online Course from Alan Summers is in development.

The Tanka Journal Online Course is in development. 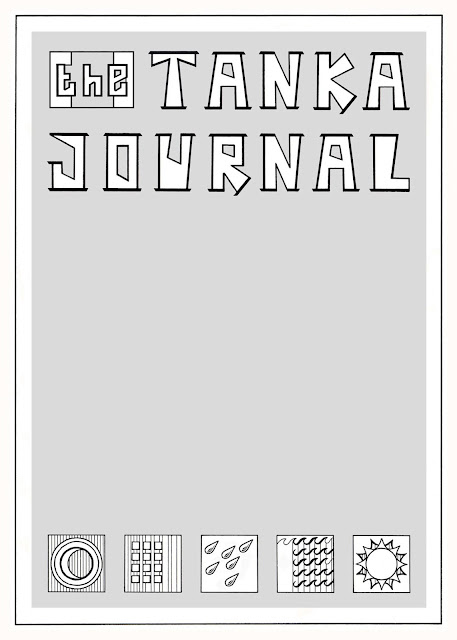 Alan has had tanka published in various print, online, and transmedia magazines and anthologies.