RENGA: "splicing spontaneity into your writing" with Alan Summers 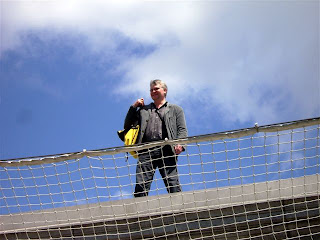 
RENGA: splicing spontaneity into your writing
with Alan Summers
THURSDAY MAY 20th 6.30pm-8.30pm
Mr. B's Emporium of Reading Delights
This event is part of the 2010 Bath Japanese Festival
Renga is first of all, great fun!

It's a type of joint group activity where we all get involved in writing a poem with haikulike verses called 'links'.
Each verse is not so much poetry in the usual sense, but captures snippets of everyday ordinary plain speech and language that we easily forget is just as magical as formal poetry.

It's really easy, and gaining huge popularity all the time: for instance the Bath 1000 Verse Renga (book coming out soon) was so popular with both the public and writers that we actually received more than 1000 verses!
BBC article weblink:
BBC article: Bristol poet leads giant verse


You don't even have to know what renga is, or its "starting verse" - better known as haiku - to get involved.

Not only is it fun and accessible, it's a great way to bring out the ingenuity of the writers involved, and boost self-confidence in your own writing.

It also provides an extra tool for novelists; poets; and non-fiction writers to help maintain spontaneity in their own writing!

It's really as much the inter-play between writers that makes this both fun, and highly productive to your own writing; as it acts as a real tonic for the writer in isolation
.
Alan Summers is founder of With Words, an organisation that exists to promote the love of words. Alan is the Literature Director of the Bath Japanese Festival, and a Japan Times award-winning writer for Haiku and Renga.

With Words is proud to be able to publicise this important event as part ofCHIPPING CAMPDEN 2010 LITERATURE FESTIVALwww.campdenlitfest.co.uk:

Open your Hearts and MindsTorture Survivors and Trafficked WomenWednesday, 5th May 6.30-8pmWrite to Life: Torture Survivors, the therapeutic writing group of the medical Foundation for the Care of Victims of Torture are sending four of their writers to Chipping Campden School. The writers are from countries such as Uganda, Syria, Somalia, Cameroon, Congo, Iraq, and Turkey supported by novelist and journalist, Michael Arditti. Proceeds from this event, including sales of Life Matters, go to the Medical Foundation. HEARTS AND MINDSFriday 7th May at 7.00 - 8.00 p.m.
Chipping Campden School
London journalist, Amanda Craig reads from her latest novel HEARTS AND MINDS which is about Immigration: exploitation, integration and murder.
Posted by Area 17 at 6:25 pm No comments: