Presence: A core part of haiku poetry – Article in progress for Writing Poetry: the haiku way by Alan Summers

An article in progress for Writing Poetry: the haiku way
by Alan Summers

“There is no good singing, there is only present and absent.”
― Jeff Buckley

“The thing is that I also like to have lyrics that are inclusive, that give you space to be inside them, to put your experience on to them, so that they can move through other moments.”
― Jeff Buckley

From:
Presence and Absence in Modern Poetry
Hans, James S. (1980)

‘Modern Poetry’… [is] “something” [that] has been called everything from a return to “reality” to an emphasis on self-reflexive poetry, but the reality these poets see is so various and the reflexivity of their poetry so different that another approach to their work seems necessary.

"One could say that presence and absence ultimately come to be defined in terms of the relationship between language and reality, but for both TS Eliot and William Carlos Williams the problem was more profound than that."

"It has to be living, to learn the speech of the place."
https://en.wikipedia.org/wiki/Of_Modern_Poetry

In the Analyzing the poem section of Wikipedia, it says:
"the act of the mind is not past, present, or future. It is ongoing."

I feel that haiku have to do this, and in so doing it has its own presence (and absence) at the same time.

presence
ˈprɛz(ə)ns/
noun
noun: presence
The state or fact of existing, occurring, or being present.
attendance, attending, appearance, residence, occupancy
antonym: absence
A person or thing that exists or is present in a place but is not seen
◦ synonyms:
◦ ghost, spirit, spectre, phantom, vision, wraith, shadow, poltergeist, manifestation, apparition etc…

Ezra Pound’s Metro poem, considered to be an early hokku
or haiku includes the word apparition:

In a Station of the Metro

The apparition of these faces in the crowd;
Petals on a wet, black bough.


And William Carlos Williams brings the presence of a simple

red wheelbarrow and white chickens into "a precision of
presence":

so much depends
upon

beside the white
chickens.

Origin of the word presence:

Middle English: via Old French from Latin praesentia ‘being at hand’, from the verb praeesse (being present

Definition of presence for English Language Learners:
the fact of being in a particular place : the state of being present. The area that is close to someone: someone or something that is seen or noticed in a particular place, area, etc.
https://www.merriam-webster.com/dictionary/presence

“Haiku play in this way with presence and absence, and also with the present as “ever-now,” presence as an un-fleeting eternal. The very brief non-narrative poem lives and dies, brightens and fades in the way we attend through presence, in reading and contemplation. Such “edgy” aspects of context, background and backstory promise haiku romance.”
From the opening section called As fireflies from The Romance of Endings in Haiku by Professor Richard Gilbert
http://www.underthebasho.com/2016-issue/features/1666-the-romance-of-endings-in-haiku-by-richard-gilbert.html

I would like to put forward that haiku operates as both a poem of presence as it does with an absence of something, and that the absence of that something is as vital as placing a presence of a something or somethings.

In the final version of Writing Poetry: the haiku way there will be haiku by various poets. For now I will show examples of my own haiku, and as the main title is called Presence, these will be examples from the highly regarded haikai magazine Presence: haikupresence.org/home

Of course we don’t need to see the actual children who have dropped a glove or two over time, but think of all the children who have, as they are lost in the moment perhaps. Then of course we could also remember news stories of displaced children due to war and famine.

On another serious note:


In the UK, a child is reported missing every 3 minutes

We cannot imagine what the effect is on a parent and a sibling when a child is unexpectedly 'absent' perhaps for ever.

A biographical haiku again (experiential). The sky is not really visible to the naked eye, nor do birds really ‘turn’ the sky, but themselves. There are absences that form major parts of a presence, such as 'sky', the air that we breathe, the moon that effects our large and small bodies of water, and other liquids such as our own human bodies. We are constantly 'turning' in one form or another.

the grimace
of the roadside cat
its last

You could say this is almost like Alice when she is only seeing the Cheshire cat’s grin. Cats are often famous for their fastidiousness. This could be seen as the last act of fastidiousness.

The Cheshire Cat is a fictional cat popularised by Lewis Carroll in Alice's Adventures in Wonderland where one of its distinguishing features is that from time to time its body disappears, the last thing visible being its iconic grin: https://en.wikipedia.org/wiki/Cheshire_Cat

I was amazed that people on a very busy and bustling street crossing were unaware or disregardful of people’s personal space, yet somehow the “low on the ground” dog faeces was somehow visible amongst hundreds of feet, and respected in its way, moreso than our fellow humans.

Do we see the train? Do we need to see the train?  Does the bird need to "see" the train for what it is in order to sing? Singing is a form of vibrating and reacting to other vibrations. We don't often 'see' vibrations, but they are not really absent.

deep into winter
the sun measured
in kettle clicks

Perhaps we don’t need to see the kettle, and perhaps the kitchen itself where someone is alone and regularly makes hot beverages by boiling water. Its absence except for the sound of being clicked on, and later automatically clicked off is perhaps enough, and a symbol of the passage of time. The click of a kettle both on and off is unconsciously soothing for something we know, or no longer recognise, as absent. Yet that in absentia is a tangible presence.

My father did not suffer the horrors of war as much as his brothers and fellow participants within the arena of World War Two. He mostly told of the great experiences of Africa and India, but once, only once, did he tell me the horrible experience of picking up some blown up body parts of fellow soldiers for identification purposes in the deepest night, with no light allowed, after strafing by enemy aircraft.

the buddleia
and the butterfly...
vanishing stars

It’s always a wonder to see the multitude of stars during the dark hours of the night and very early morning, only to witness them disappear. Of course they are always there.

The other side of the mirror is often not seen but its presence is very much there via the front facing actions of the reflective surface we see. There is not always a need to see the smoke to 'see' the mirror.

Childhood is absent in us as we grow as adults, isn't it? It's absent from our lives as adults. But can we truly operate as adults if we make our 'once-childhood' really absent in our lives?

dry stone wall
Paddington Bear
out in the rain

Do we see ‘Paddington Bear’? Do we just think of him at Paddington Train Station arriving from Peru all alone and initially friendless? Is Paddington Bear, the fictional creation of Michael Bond, a symbol of loneliness, or of adventure? Is this the first great adventure of a child finding their independence? I can let the reader decide.

Photos by myself yesterday at London's Paddington train station. 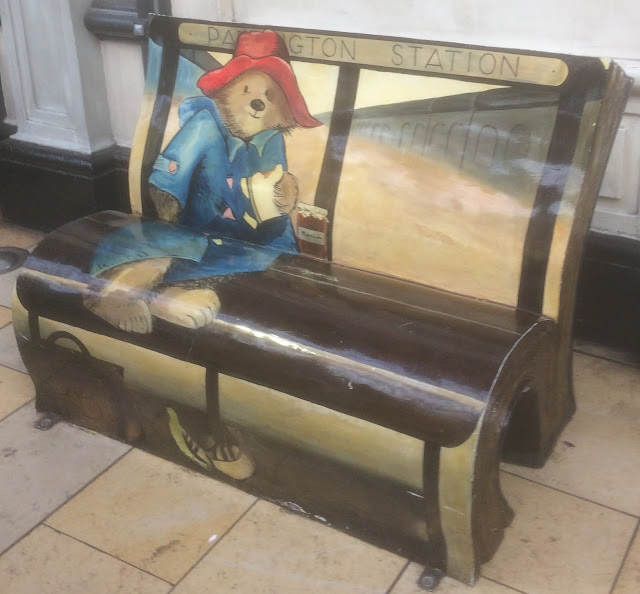 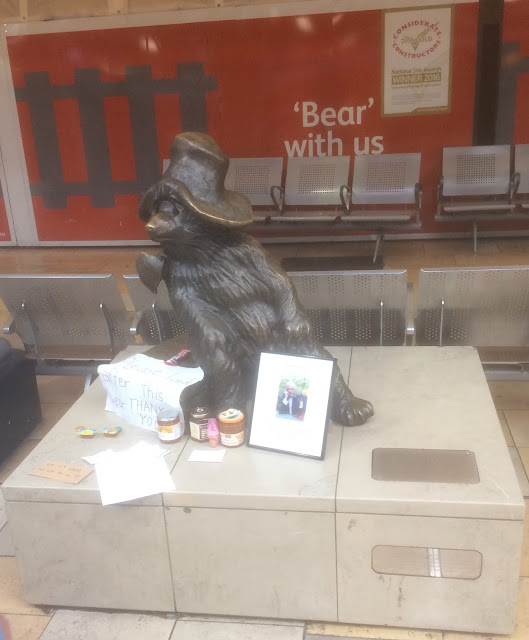 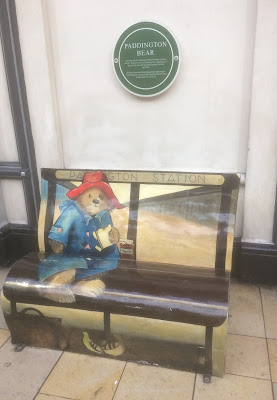 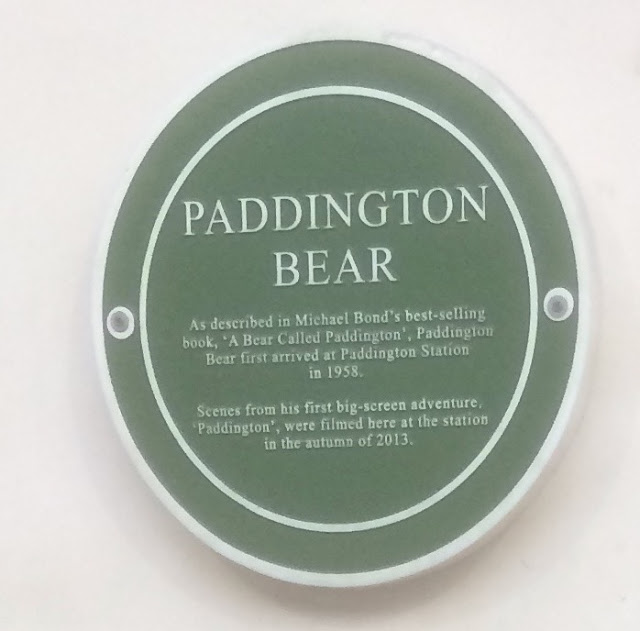 For anyone interested in becoming part of Call of the Page online courses in haiku and related genres please do drop Karen a line at our email address: admin@callofthepage.org

The Cattails journal of The United Haiku and Tanka Society is open for submissions!

We look forward to even more submissions for this ever popular publication!