Children and young people are getting us to look after our planet through the message of haiku!

The Haiku Society of America is sponsoring One Year Memberships as prizes for The 2011 Kids Count for Earthday Haiku Contest created by Planetpals (Worldwide); With Words (U.K.); and Sketchbook Haiku Journal (USA).

The contest is designed to combine the love of Earth with the sheer simple
fun of writing Japanese haiku in English!

We call it the The 2011 "Kids Count for Earthday" Haiku Contest because we want you to help all of us to learn how to keep the planet clean and healthy!

Kids and young people will only need to count approximately 5-7-5  or use some combination of short, long, short syllables, to create their Earthday haiku.


The Contest has four haiku poets all experienced in judging British and American haiku, and international haiku from children and young people worldwide.

So who can enter?

Children and young people aged from 7 years old right up to 20 years from
the USA, UK and English Speaking Countries (including Alaska, Puerto Rico, and Hawaii; as well as Japan; Africa; India; Pakistan; Bangladesh; China; Middle East; and Australia; New Zealand and all other countries). If English is not your first language please do add an English language version of your haiku entry as well.

The Haiku Society of America is represented by an'ya; Alan Summers of With Words (UK); Judith Gorgone of Planetpals (Worldwide); Karina Klesko of Sketchbook, Journal for Eastern and Western Short Forms.


The competition is open to individual students 7 - 20 years old;
and the theme is"What Earthday means to you".

There will be winners for each category and entries based age appropriately.

All entries must be postmarked no later than April 22, 2011
and include the students name and address or school name and address.
(*NOTE: winners private information will not be distributed to any 3rd parties - allinformation is for internal purposes only )

Entries must be e-mailed to:
kidscount4earthday@gmail.com

To be notified of results then email kidscount4earthday@gmail.comagain
saying "Let me know!" in the subject line.

Winning Entries will be published in Sketchbook, a Journal for Eastern and
Western Short Forms.

For further information go to the competition website:
http://kidsearthdayhaiku.blogspot.com/

I think that's a brilliant price. It's a bargain for what you are offering. I thought it was going to be much more.
Annie Bachini (previous President of the British Haiku Society)
Claridge House April 2011 Course details:
http://www.claridgehousequaker.org.uk/courses.php#April

The retreat is fantastic, the venue is peaceful, and everyone and
everything is catered for: no-one gets hungry and thirsty, and it's all
done for us too! The food is amazing, and I can vouch for that as my
background is in the family restaurant business.

We've had first timers to haiku as well as seasoned haiku writers
attending, and everyone benefits from the atmosphere.

The courses we lead, this is a new one, are excellent value, and it isn't
just for the price of the course, but superb food, accomodation, being
catered for throughout the day etc...

It really is a good course for anyone serious about haiku, or anyone
wanting an intensive course in haiku.

A week is perfect for getting a good grounding, rather than workshops
spread over a year.

It's also great fun, as it has to be, as we have four workshops per day,
but plenty of tea and coffee and non-caffeine hot and cold drinks too!

No matter how large the group every individual gets special treatment.
There are lots of opportunities for private one-to-one sessions, not just
once, but throughout the day, and the week.  It means I get to bed
exhausted but very happy. ;-)

We end the course Thursday night with a fun renga session.  There's
nothing intense in our intensive course.

Alan is founder of With Words, a UK-based provider of quality literature,
education and literacy projects, often based around the Japanese genres.

He is also the judge of The With Words International Online Haiku Competition.


Alan is also a founding editor for haijinx online magazine for humour
within haiku.

Along with being an editor for a number of anthologies, and two
haiku/renku online magazines, he is also co-editor of Fifty-Seven Damn
Good Haiku by a Bunch of Our Friends ISBN 978-1-878798-31-2 (2010) with highly-respected American publisher and poet Michael Dylan Welch that features the work of British, American, African and Japanese writers of haiku:
http://area17.blogspot.com/2010/11/fifty-seven-damn-good-haiku-by-bunch-of.html

Alan is an experienced workshop leader, and a Japan Times award-winning
writer, with an MA in Creative Writing from Bath Spa University.

Alan is able to work with people who have no experience of poetry to
encourage them to try it.  He watches and listens with patience and
respect and offers guidance that is flexible enough to empower the
workshop participants but firm enough to support them.

Her non-haiku work includes My Mother Threw Knives (Second Light
Publications 2006); and she was Highly Commended in the BBC Wildlife
Magazine’s Nature Writer of the Year Awards, 2009.

Members of the Haiku Northwest group have generously offered to host the 2011 conference and they have many exciting plans already in the works, including a harbor cruise.

The conference itself will be held at the Seattle Center, at the foot of the Space Needle, providing easy access to haiku writing and walking opportunities such as Pike Place Market (via the monorail), the Olympic Sculpture Park, the Experience Music Project rock-and-roll museum and Science Fiction Museum, and countless other attractions—including fleet week and the Seafair festival, with the Blue Angels performing overhead.

The conference theme will be “Fifty Years of Haiku,” celebrating the past, present, and future of haiku in North America.
The deadline for proposals has been extended to February 28, 2011 (http://www.haikunorthamerica.com/pages/2011.html), but sooner is better. Proposals do not have to fit the theme.
If you’ve already submitted a proposal, please confirm with Michael Dylan Welch at WelchM@aol.com that you can come to Seattle on the new dates.
Speakers already include Cor van den Heuvel, Richard Gilbert, David Lanoue, Carlos Colón, Fay Aoyagi, Jim Kacian, Emiko Miyashita, George Swede, and many others.

See you in Seattle! 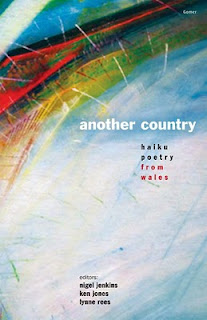 
Edited by Nigel Jenkins, Ken Jones and Lynne Rees, it features haiku, tanka, haibun and somonka – in both English and Welsh – by forty poets, from Wales's haiku pioneers.


Free entry and wine, in association with Gomer Press.