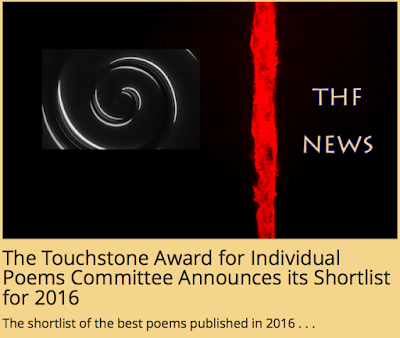 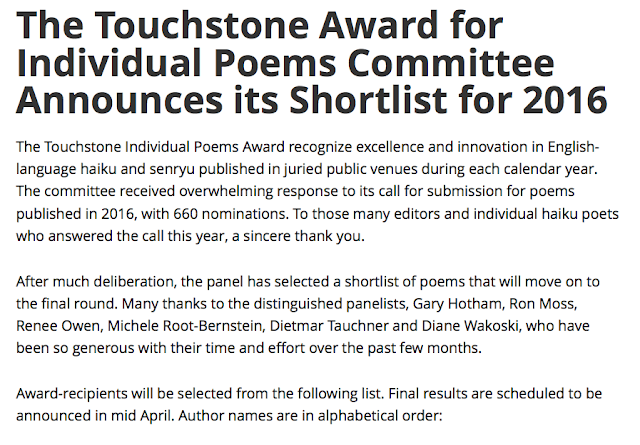 Do enjoy the other incredible shortlisted haiku, including two poets from our online courses!
https://www.thehaikufoundation.org/2017/04/09/the-touchstone-award-for-individual-poems-committee-announces-its-shortlist-for-2016/

Nova Normandy 3044 - a science fiction haibun tribute to all World War veterans both past; current; and in future wars - haibun is prose with haiku 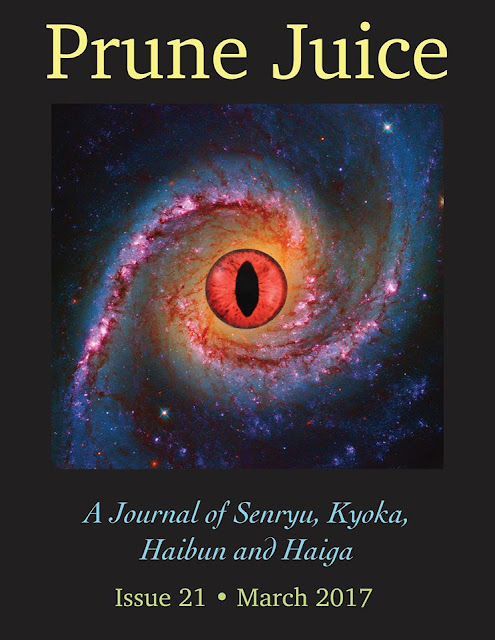 First there are the phantoms, wheeling around the up currents
in an early morning acid;

Next the spray is smashed outward, and slides between cloud scraped
shards. The tones of cloud banks subdued, and I stink in all the guises of magnesium, and iron and chlorine gripped in Co2

it’s that persistence of sweetness and chalk leaping out and through me,
disturbing

and my water defined by the colour it takes from the
sky.

I'm just me, feeling stupid as usual, alone in detritus, at the dull edge
of debris, snapping in and out of reminiscences…

The fact is I have never felt part of anyone's landscape, and it's really
too late to do that now. I invent tricks, some allied to memory, some to
encase empathy; a familiar scent of nostalgia for times long past:

I try to stop the pareidolia, seeing faces in things, drag sea colours to
me, stroke manganese blue; save the once vibrant white around each rock;

and pull away from a wasted sky while it's
still flaming.

gradually dimming the stars I adjust the astronaut in me

I'm being painted straight into the sun.

There is a case, when we return to Earth, that we need to bring vials like
planet-infused cologne from our distant outpost, or die of...

The simulation training, over at the slide of a hand, I know there is just hours to avert loss of life, not just on our side, but the others.

I shudder that so many lives will be expended...

...and select something from old records to sustain me, something to fight for later.

In what can hardly be correctly termed as a ‘day’ any longer, or as night to be honest, despite the darkness outside and the intensity of lighting onboard...

...there is some messed up confused thing that denies twilight. But I calculate that dawn is happening somewhere back home…

For information on the vast Invasion/Battle of Normandy during World War Two:
https://www.dday.org/history/d-day-the-invasion/overview.html

War moon is a haiku that has previously been published:

Essay credit:
Haiku: The Art of Implication over Explication: http://livinghaikuanthology.com/poets-on-haiku/defining-haiku/2901-haiku-the-art-of-implication-over-explication-by-alan-summers.html

This haiku was part of the “Rocket Dreams” commission performed on U.K. National Poetry Day October 4th 2007 along with Space Historian Piers Bizony with selected NASA images, as part of World Space Week: 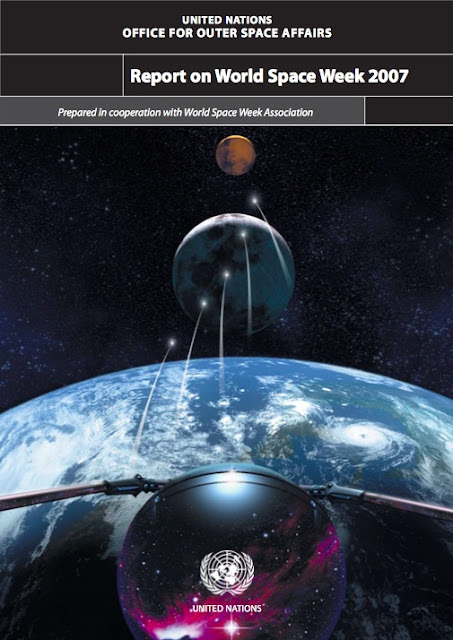 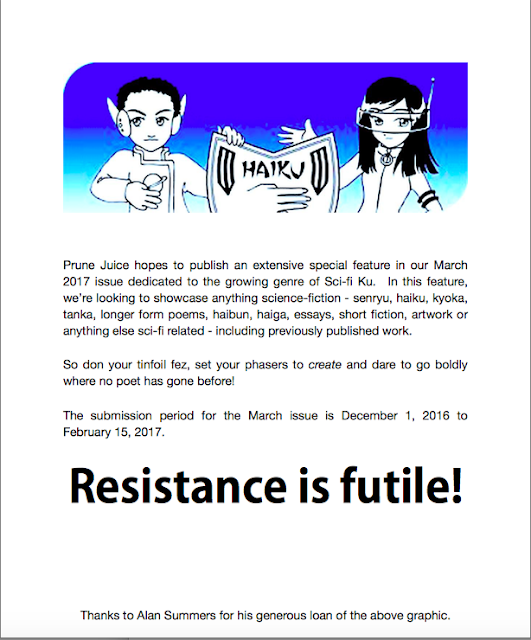 the smell of old white
everything is replicated
in me

microwave meals
the childbot spins itself
into rainbow splatter

Previously published but reproduced in Prune Juice thanks to editor Steve Hodge:

the narrow roads
in parallel universes
a butterfly sneezes

double thumbs
the supplicant’s throat opens up
its tattoos

***
Please enjoy the whole Prune Juice issue of both present time senryu and future senryu and an essay called The Dark Side of the Moon: The Art of Writing Scifaiku by Deborah P Kolodji
https://prunejuice.wordpress.com/2017/04/02/prune-juice-issue-21-now-available-httpsprunejuice-files-wordpress-com201704pj-21-pdf/