Alan Summers and Karen Hoy will be at the Poetry Swindon Festival 2018 event!


In this indoor/outdoor event, haiku expert Alan Summers will guide you on a "haiku writing walk" or ginko.

The notes collected will form the basis of your own haiku poems for workshopping back at the Museum.

We will start with Alan reading a number of his haiku, and deconstructing these shortest of poems to show how each originated with his observations of life and the environment.

We'll then all go on a haiku walk, known as a ginko in Japan, and make our own observations and field notes as raw ingredients for our own haiku.

A relaxed workshop follows, where Alan, alongside Karen, will lead you through editing and splicing your notes to create an original, resonant haiku of your own.


If you wonder what myself, and Karen, look like, and what a ginko is, check ten minutes into the video, where this walk, back in 2015 was set in Bradford on Avon: 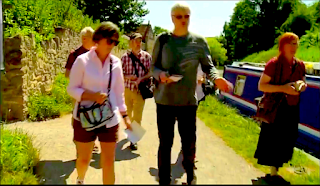 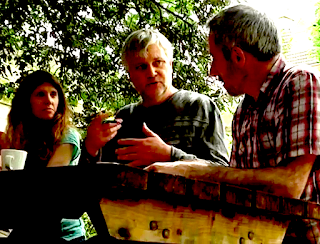 BOOKING for the Swindon Ginko!:
Go to Eventbrite to get your tickets!
https://www.eventbrite.co.uk/e/poetry-swindon-festival-2018-workshops-passes-tickets-39387665568


Here's a series of screenshots for the festival payment process if you haven't used this system before:

Click onto   Tickets   which is top right (see screenshot photo below):

Then scroll down until you find my workshop details (screenshot photo below):

Or go straight to the individual workshop list and other info:
https://www.eventbrite.co.uk/e/poetry-swindon-festival-2018-workshops-passes-tickets-39387665568#tickets

Click where it says 0 and a downward arrow to give you this: 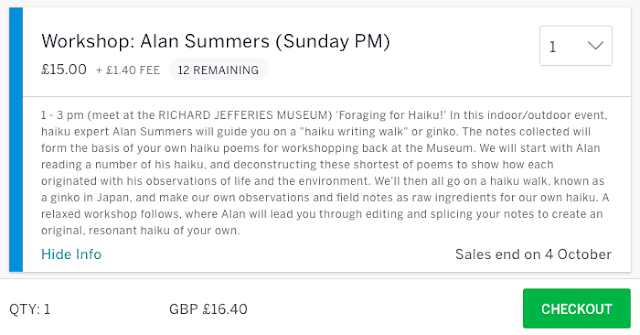 And this page will come up, and you have your various choices of payment from credit card to PayPal etc... 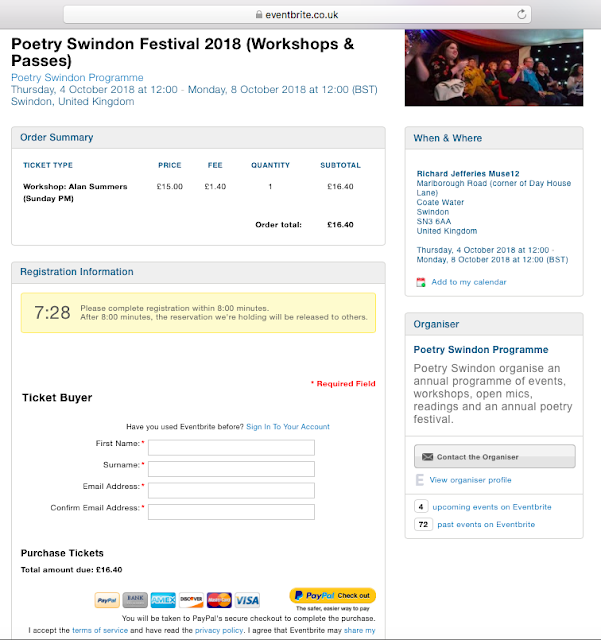 http://richardjefferies.org/poetry-swindon
Swindon is in the South West of England, nestled into Wiltshire:
https://en.wikipedia.org/wiki/Swindon

We also run online courses, sign up for news!

“When power corrupts, poetry cleanses,”
John F. Kennedy said this when looking at the poet Robert Frost and his role in life.

I wonder if poetry is a curious and private combination of a refuge from the media dominated promotion of the ills in life; and a way for anyone and everyone to claim their own voice, either by adopting certain artists, or even creating your own art.

Adrienne Rich wrote:
“It is through [the] invisible holes in reality that poetry makes its way,”
and haiku, despite its smallness, has been adopted by more people than perhaps any other art-form. But all art matters, even if we don’t like it, it’s someone’s voice being heard despite the filtering out of the type of news that matters in an everyday kind of way.

Does it matter if we cannot understand everything in art all at once? Much of the art that was not understood, or even liked in its time, has often found its way into the hearts of more and more people over the decades.

When we look for a voice, and find it is not always represented well, both in the media, the business world (although they often ‘borrow’ from art to sell their message and products), and in politics.

political election
my application to be
a) human

Sometimes we don’t know if we are being slowly diminished or not, which is why I often appreciate the biographical approach to haiku.

Haiku (plural spelling too) can be triggered by just the smallest of things in a day, but set the record by which we might remember a few more “other moments” too.

As a writing challenge set by Kathy Munro about our sense of place I wrote this haiku:

Atlas Mountains
the snow-capped peaks
in every sunrise

Early in 2018 myself and Karen went on a simple budget/package holiday to Morocco. What we didn’t expect was a view, a whole vista it seemed, of the legendary Atlas Mountains from our tiny room balcony. Every day from sun up to sun down I would pop out onto the little balcony, or even just glance through the room windows. Although it was Winter in Marrakech (Morocco) it was still a surprise to see snow in the distance, as some of us automatically think of anywhere in Africa being hot.

The view was an incredible and humbling gift, as much as the package offers were great, and instantly brings back a multitude of memories. No institution, be it the media, politics, or big business can give that, just the mountains, and my haiku poem, and my voice.

The poem can be read both simply, and in other ways, and directly experiencing that week of a spectacular part of the hotel room into a single tiny three line verse.

In our complicated lives, whether we invite those complications or not, I find a few seconds refuge in observing local wildlife. It could be the sparrows that nest in our roof, or the visits by jackdaws, robins, or representatives of the titmice family. Sometimes going back to nature can enrich us, and perhaps reset us...

baby robins
the world is reset
for a moment

the big warm ...
as if clouds cuddled
baby sparrows

banditry of titmice
the long-tails fleeting
through the air

“banditry” is a collective noun for titmice
http://www.moorhen.me.uk/iodsubject/birds_-_other_tits_02.htm

the scent of rain
birdsong stretches
as far as Mars