Haibun - From one-bun to monobun to longer pieces of prose with haiku writing and Journeys 2015 in at no. 7 in Amazon Hot New Releases

I feel tremendously privileged to be in this haibun anthology expertly edited by Dr Angelee Deodhar.

These three haibun are not in the anthology because I want you to buy the book and see what selections were made of my work.

These three monobun written by me are published in Blithe Spirit, Journal of the British Haiku Society.

Although enticing, I decided to create either single line prose, or single paragraph prose, often incomplete, followed by a three-line haiku rather than a monoku (1-line haiku). The following three are my first monobun, and straight after are three more, this time published by Human/Kind journal.


Here are my monobun (created by Alan Summers in 2015)

Sippin’
this single malt I handwarm so gently letting go…

N.B.
The "Angels' Share” is the amount of alcohol (around 2%) that evaporates normally from oak casks.  Whisky producers once thought it was angels taking a small sip before the whisky was matured for bottling.

80 gsm
probably copier paper that became creased and stained not just with tears, but grief, forced through finger pores…

her sweet tooth-
Dear John letters
stuffed in a box

boys fishing
a pointillism of raindrops
dotting the river

is something that haunts so many of us just starting out on life, hovering just beyond the periphery of parental constraints, where we fly or fall on a single smile, and…

blustering wind
does she really love me
dandelion?

A longer haibun with eleven haiku appeared in the November issue of Blithe Spirit:
http://area17.blogspot.com/2016/08/the-beat-is-back-haibun-prose-and-haiku.html

Do please consider a Call of the Page course or one-to-one feed if haibun fascinates you: https://www.callofthepage.org/learning/

Haibun - the practise of interspersing prose writing with haiku, are prose pieces in numerous styles from journalistic writing, diary entries, prose poetry, long fiction through to flash fiction, that usually include one or more haiku within the body of prose or starting or concluding a body of prose.

The days and months are travelers of eternity, just like the years that come and go. For those who pass their lives afloat on boats, or face old age leading horses tight by the bridle, their journeying
is life, their journeying is home. And many are the men of old who met their end upon the road.

It was the twenty-seventh day of the Third Month [16 May]. There was a wan, thinning moon, and in the first pale light of dawn, the summit of Mount Fuji could be dimly seen. I wondered if I should ever see the cherry trees of Ueno and Yanaka again. My closest friends, who had gathered together the night before, got on the boat to see me off. We disembarked at Senju, and my heart
was overwhelmed by the prospect of the vast journey ahead. Ephemeral though I know the world to be, when I stood at the crossroads of parting, I wept goodbye.

So that year – the second year of Genroku [1689] – I had suddenly taken it into my head to make the long journey into the deep north, to see with my own eyes places that I had only heard about,
despite hardships enough to turn my hair white. I should be lucky to come back alive, but I staked my fortune on that uncertain hope.

If you are interested in an online internet course on haibun we will run the course again later in 2017.

Karen will be delighted to send you details about the course. 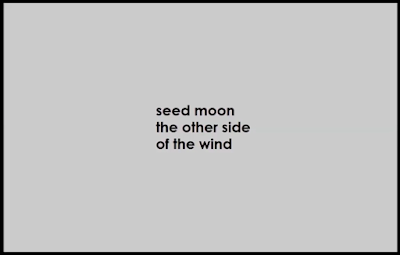 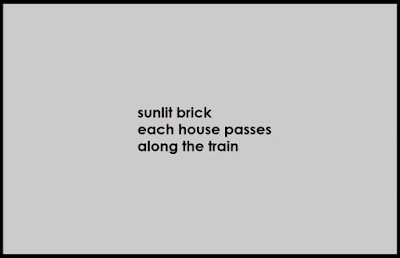 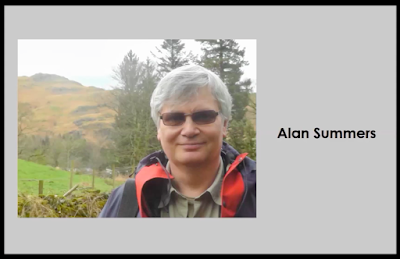 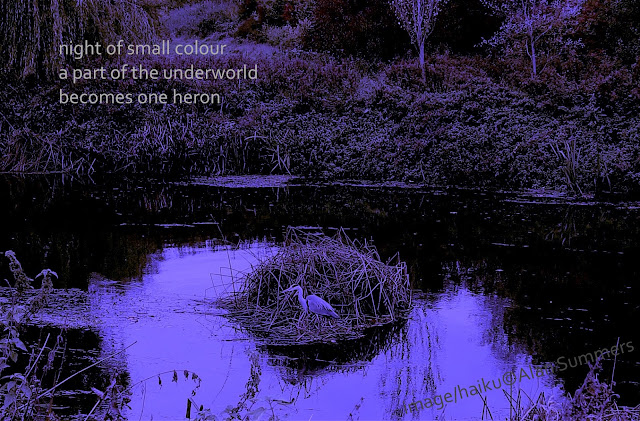 This haiku is deeply influenced from my reading of the Greek myths and legends as a boy from populist literature through to The story of Orpheus and Eurydice,  as told by Apollonius of Rhodes, Virgil and Ovid and others, in translation.

This haiku is classified as mythopoetic reality. The mythopoesis [is] evident in the semantic twist of “small colour” of night, a part of which “becomes on heron.”
What lies between realism and imagination, between living and dreaming, [as] a particular form of sanctuary; a space of poiesis. It seems most most fragile and nuanced, insignificant and ephemeral—yet it calls or we call, in seeking deeper, more enriching, increasingly multiple, multifarious dimensions of knowing in psyche.
Wallace Stevens refers to this poetical process as “enlargement”.
Pages 223 and 224:
Richard Gilbert, Japan

My haiku is both experiential, and inspired by the late evening/night. This is a modified photo I took but the night of small or little colour was very much like this to my naked eye. You may or  may not see that it has 17 syllables, 5-7-5 pattern.

fuller's teasel
lapwings call out
to a stray cloud

train station
the heat of the platform
in my blood


The haiku was composed for the NHK TV (Japan) feature:
Europe meets Japan - Alan's Haiku Journey:
https://www.youtube.com/watch?v=3VS36AGVI6s
Permission given by NHK Television to The Haiku Foundation to appear on YouTube.

dandelion fluff
I lose count of my time
on this earth

a lamb’s cry
scudding clouds over
the cemetery wall

splitting the sky
a kingfisher lifts a branch
off the breeze

Cow: A kine of cows (twelve cows are a flink)

marsh marigolds-
opening up hidden suns
to the morning

Cat moon
my wife ill with posset
at the restaurant

exchanging winks
how come this cat knows
my midnight reasons

dad and son
a wasp changes knuckles
at the football match

The Night Train
of paper rock scissors
you sleep into me

For those who are new to haiku and may not know about me.  I'm very much a global haiku poet, but I'm also someone who captures a little of Britain from time to time.

Alan is a double Japan Times award-winning writer; recipient of the Ritsumeikan University of Kyoto Peace Museum Award for haiku (1998); and a Pushcart Prize nominated poet.

"Widely known haiku poet...as dry as vintage champagne"
YOMIURI SHIMBUN (14 million readers in Japan)
Part of a piece on Alan while he was in Tokyo on my birthday (16th September 2002)

Alan is Co-Editor of five Haiku-based Anthologies and four Haiku Collections, and author of the forthcoming book Writing Poetry: the haiku way (Spring 2016).

Alan runs Call of the Page, with his wife, for online courses and live events.

Alan has been over the last twenty years:
Posted by Area 17 at 7:01 pm No comments: