We are pleased to announce that the 2010 Words International Haiku Online Competition is now open: http://www.withwords.org.uk/comp.htmlThis year at the request of some entrants we will be announcing Highly Commended and Commended authors rather than a longlist and shortlist.Highly Commended poets will be given the option of having their haiku published online.Good luck to all of you entering our next international haiku competition, and many thanks for your support.Results of the competition in previous years can be read at:http://www.withwords.org.uk/results.htmlAlan, Karen & Kathy, With Words
Posted by Area 17 at 1:55 am 1 comment: 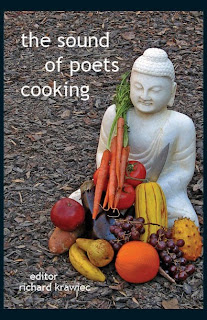 The Sound of Poets Cooking
editor Richard Krawiec
Jacar Press, 2010, 172 pages
ISBN: 9780984574001
http://jacarpress.com/books.html#sopc
Featuring work by five dozen poets, including NC Poet Laureates Fred Chappell and Kathryn Stripling Byer, and dozens of other nationally celebrated writers. The poems alternate with recipes written by the poets, their family members, lovers and friends. The writing is at turns sensuous, hilarious, elegant, and playful. The recipes range from Asian, through European, to Middle Eastern dishes, as well as regional favorites from across the U.S.--tiramisu, homemade curry, vegetarian meals, exotic seafood, some simple, some complex. There is something here for every palate, literary and culinary.


Proceeds from the sales of this book will be used to fund writing workshops in excluded communities.
.

Click for review:
Review: The Independent, in Durham
"The first step in Alan Summers' Rosehip Curry recipe (yum!) is to write for several hours in a walled garden in direct sunlight."
Wild Goose Poetry review says:
"The Sound of Poets Cooking  is a new, 172-page anthology of poems about food accompanied by related recipes, from Krawiec’s fledgling press, Jacar Press. And it is an impressive debut, featuring wonderful work from poets both familiar and new, including two NC Poets Laureate, Fred Chappell and Kathryn Stripling Byer ... and more, wrapped in a clever cover with an image of Buddha cradling a pomegranate, eggplant, carrots, tomatoes, sweet potato, chef’s knife and some spiky yellow fruit I’m not familiar with, appealingly conveying the mixture of spirituality and whimsy one might expect from poetry about food."


North American Readings for 2010 and 2011
by Richard Krawiec and other poets
Oct 23, 3pm Greensboro Barnes and Noble,– Mark Smith-Soto Coordinator

April 23 all day event at Barton College, including readings, workshops, and
a concert by Fleur de Lisa – Richard Krawiec for now
.

Blast from the Past Haiku Residency; enjoy the video!