So what is it about one line haiku and did you know it's common to see haiku (and hokku) within the Japanese language in just one line?

A lot has been said, and will continue to be said about one line haiku aka the monostich or the monoku.

Here is my piece regarding techniques, devices, and examples.

A longer version appears in a new anthology called Yanty's Butterfly with examples from both established and very new writers in the haiku publishing world: 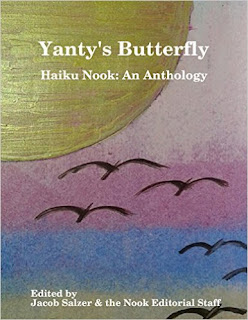 And an article about one line haiku in English will appear in my book “Writing Poetry: the haiku way”.


monoku
One of the many devices I employ is the abrupt method of syntax: It's a deliberate subvert technique, as I’ve keenly noticed that both syntax and semantics can be utilised in a manner not possible or accepted in normal modes of writing, and certainly not in the classic/traditional way of writing haiku in the English language (EL).

Japanese-language haiku themselves are actually one-line haiku, vertically written, and when read in transliteration rather than translation into English, they do not work in a linear English language manner, but carry their own power outside of attempts to translate them into a translator’s version of smooth English grammar and syntax.

So why not use that power for English Language haiku into one line?

It’s also been said that if it's a one-line haiku you are aiming for, that they work best when they cannot be remade into three line haiku.  I’m not sure that’s always the case, but it’s a useful guideline to go by, or work around.

I'd suggest introducing "abruptions" aka abruptive methods, as one method which is my term for breaking up normal syntax/semantics.

Abruptive techniques is my term for sharp changes in directing the reader, and I often subvert the adjective 'abruptive' into a noun i.e. look for abruptives in your haiku.

*
merriam-webster.com:
abruptive (adjective) : showing a tendency to be abrupt

“Sometimes one-line haiku are, or appear to be, a little subversive in order to tell a greater truth. If it's too smooth it could be just a line of poetry, or a statement.” Alan Summers, With Words

Each poem can be several poems, and the more the different readings cohere and reinforce each other, the larger the field occupied by the poem, the greater its weight in the mind.”

walking among old stone cattle out in the rain

The one-line haiku in English is perhaps the speedier cousin of the more common poem over three lines, and its velocity - rather than the slow thoughtful pauses in three line haiku -can be one of the major features across the various qualities to one-line haiku. Whether the author wants these monoku read rapidly or a little slower, we touch on just some of those where velocity with quality of language as sound, not just meaning and content, can play its part, and produce from velocity and quality something I will call veloquality.

We can have either multiple interpretations or misreadings and misdirections, as well as thoughtful verses that lead you to places you didn’t know about.

One line haiku can appear in varous guises but always need to contain some aspects of: The gaps between the fragmentary sections of haiku

Does one-line haiku echo the one line image of the fragment/section and phrasal (two line imagery) sections that creates sparks, bringing together an altogether different and extra overall image? Or does it do something different to the technique of juxtaposing imagery?

Above all it’s the invisible text that counts as much as the visible text, as a catalyst for everything, including the vertical layers of alternative, additional, and complementary meanings from the horizontal surface meaning.

Haiku is like the Tardis, it appears small at a first glance, but when you walk through its doors, it’s bigger on the inside:
http://weirdthings.com/2011/07/why-is-the-tardis-bigger-on-the-inside/

at the end of the night snow fox


childhood river the sunlight as it falls

fainter stars the bluebells shake out a morning

where the river runs I glitter fish scales

sunrise the gulls segue into the light

courting foxes in midwinter the security of imagined daisy chains

under and over the river crossing bridges


former president of the Haiku Society of America

the blue note I turn to wind-spun snow

all those red apples amongst the blue tit

tearing up snow falls slowly a kind of blue

petrichor this green sunsets in yesterday

irezumi the river coils into heron

nautiluses who remember useful things for only a day

giallo this restricted area my birthplace

n.b. The word 'trials' is intentional, a case of subverting the expected, as in readers expecting 'trails' but 'trials' suggests a deeper context.

green alkanet between the whispers rain

I dream of swimming office blocks

Alan Summers
Publication Credit: Blithe Spirit 25.4 (November 2015)
From the haibun The Beat Is Back:
http://area17.blogspot.co.uk/2016/08/the-beat-is-back-haibun-prose-and-haiku.html

Alan Summers
Publication Credit: Blithe Spirit 25.4 (November 2015)
From the haibun The Beat Is Back: http://area17.blogspot.co.uk/2016/08/the-beat-is-back-haibun-prose-and-haiku.html

far off Helvellyn snow the nouns of verbs

I once was this stone home for another

dragonfly army I slip off the skins of men in pain

Unforgiving rain I write my next epitaph in a dream

RED KITES, and that eerie call:
At 10 minutes 33 seconds into this recording you get a fairly good capture of the unusual and eerie call of a red kite. I heard over half a dozen kites at one instance making these calls, like a haunting and spooky melody or film soundtrack: https://www.youtube.com/watch?v=p1SyluTQfHk


juniper the tether end of larksong

moonlighting crows in other colors


not yet light the wall its black cat


sun off stubble a train in its landscape

a river surreptitiously the heron


she carries the warm gun's child

Habeas corpus I hold the other ghosts

first swifts the sky turns out of its own blue

Alan Summers
Publication credit:  The Other Bunny (August 7, 2017)
The House On The Hill (ekphrastic haibun)

the war she never returned Vergissmeinnicht

A literary allusion, as well as a comment on the brutality of war.

"Vergissmeinnicht" by Keith Douglas, read by a young boy:
https://www.youtube.com/watch?v=xsTDMTiBSxg

wishbones the ritual with my mother

Note:
About Thanksgiving and turkey wishbones:http://www.startribune.com/no-bones-about-it-breaking-the-wishbone-is-a-family-tradition/283837301/

in between the river denizens hurtling notes around

where the butterflies went trailing fingers there

For anyone wanting to know more about writing one line haiku we can one-to-one sessions on one line haiku (monostich) aka monoku.
so do email Karen and myself:
https://www.callofthepage.org/learning/

all those red apples | travelling the monorail
haiku travelling in one line©Alan Summers 2014-2015
Posted by Area 17 at 4:45 am No comments: