Once upon a time in Mole Valley: Mr Tallstory's Modern Fairytale Competition

RIPPED WORDS
Wednesday 6th September 2006
The Oppo} Coffee House
72 Park Street (wheelchair access off Park Street Avenue)
Presented as part of the Bristol Poetry Festival 2006
Many thanks to Lawrence Pettener, and to the utterly mesmerising music from Anil and Beth.
It was a great night, and made even better by all the fine guests! 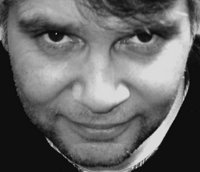 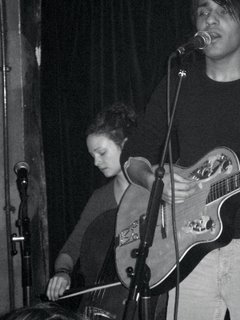 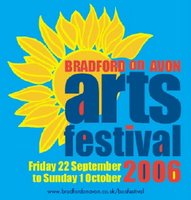 PUBLISHING YOUR POETRY with Carrie Etter from 10 - 12 p.m.
Carrie will be doing 20 minute tutorials on publishing poems.
Participants should bring 3-4 printed pages of poetry they'd like to publish. If you'd like any further details please feel free to e-mail carrie at:
carrie [dot] etter@gmail [dot] com

American expat Carrie Etter teaches as Associate Lecturer in Creative Writing at Bath Spa University and as a tutor for The Poetry School. She has published hundreds of poems internationally in 'The Forward Book of Poetry 2005', 'The New Republic', 'New Writing 14', 'Poetry Review', 'The Rialto', 'The Times Literary Supplement', and other journals and anthologies. Her Blog site

DEMYSTIFYING HAIKU: HOW TO WRITE AND PUBLISH HAIKU
with Alan Summers from 2 - 4 p.m. 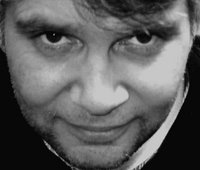 This is a relaxed group workshop introducing haiku.
You are most welcome to bring copies of favourite haiku poems to share.
Alan Summers is a Japan Times Award-winning poet, published in over fourteen countries.
Alan is also a visiting tutor for The Poetry School.
Alan's website: WITH WORDS

WORKSHOP FEES: Both Carrie and Alan's workshops are £10 per person, with a minimum enrollment of five people. 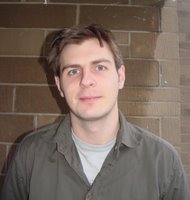 Matt Bryden teaches English as a Foreign Language in Bath and has work in current issues of The Interpreter's House and Smiths Knoll and forthcoming New Welsh Review.

American expat Carrie Etter teaches as Associate Lecturer in Creative Writing at Bath Spa University and as a tutor for The Poetry School. She has published hundreds of poems internationally in 'The Forward Book of Poetry 2005', 'The New Republic', 'New Writing 14', 'Poetry Review', 'The Rialto', 'The Times Literary Supplement', and other journals and anthologies. Her Blog

Karen Hoy is interested in human beings as part of the natural world, and this is revealed through both her film-making and her poetry readings & events. Gilded Lily Productions

OPEN MIC
Anyone interested in signing up for the OPEN MIC just tell us on the night, and don't worry, the theme isn't compulsary for you!

VENUE WEBSITE: The George on Woolley Street.
About The George Pub, described by one regular
unreconstructed and comfortable...where I can relax without any pressure and enjoy the conversation or listen to the music, whatever takes my fancy

MAPS to show Bradford-on-Avon and its Art Galleries :

Click onto the little green box and check out the Art House Co-Operative, which is opposite Ale & Porter. The Art House are still showing their Summer exhibition for a while longer: recommended.

If you are arriving by train, the first art gallery you will come across is The Bay Tree art gallery which also has a useful map on their site, and worth a visit in itself. Say hello to Jane Gibson who is the wonderful gallery owner! The Bay Tree is both close to the train station and next to the Green where the Tourist Information Centre is based. Jane's current exhibition is in full swing, and is highly recommended too!
The Bay Tree Gallery

TIC: How to get to Bradford on Avon & Parking

Map showing the George on Woolley Street Map
Posted by Area 17 at 7:29 pm No comments:

This one-day workshop introduces haiku, and its sister form senryu, through discussion and exercises. Participants will learn the ‘real rules’ of these ultra-compact forms and consider their relevance to modern British poetry. We will aim to have finished poems at the end of the session, and you may bring work-in-progress to the group (please bring 16 copies).
The workshop is designed for all levels.

THE POETRY SCHOOL
To book, please download a booking form and
return it to the office.
More information can be found under booking information.
Cost: £35, £25 concs

To read more about the BSL haiku festival go to: http://www.bslhaiku.co.uk/events.html
and click here for some great BSL haiku: BSL haiku 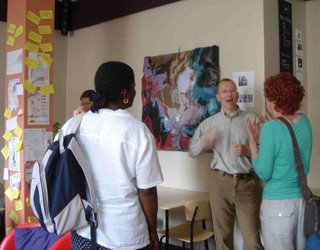 RESULTS of the 1st With Words @ Oppo} haiku contest

Check it out: Haiku Bulletin News
Posted by Area 17 at 5:23 pm No comments: 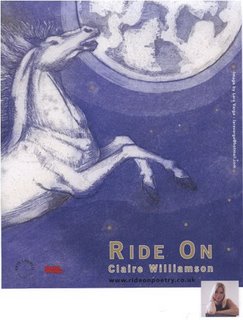 "These are poems with a job to do - to show how poetry can help us gain clarity and find value in some terrible passages of life. They deserve to be read.” PHILIP GROSS - Prof. of Creative Writing at Glamorgan University

“I read the poems in one reading, and came out a different person: a better person.” ALAN SUMMERS - Visiting Tutor for The Poetry School


Ride On:
http://www.clairewilliamson.co.uk/publications.html
Posted by Area 17 at 4:40 pm No comments: