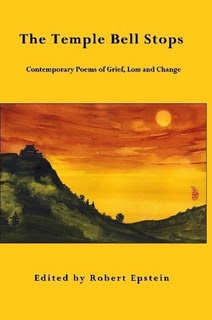 I was honoured to be invited to have my haiku included in this anthology, here is one of my haiku.


the rain
almost a friend
this funeral

This haiku has connected with so many people and I feel privileged that it has been published and anthologised so many times.

Young or old, healthy or sick, wealthy or poor, sooner or later all of us face losses in our lives. Whether these losses are big or small, they affect us and leave their mark. At the center of grief over the death of a loved one, job loss, financial hardship, divorce, miscarriage, and changes due to aging is a hardy seed of renewal.

As the poets in this collection attest, grief, sorrow and acceptance serve as a bridge between the past and future—a thread of love and courage that restores wholeness and continuity. Pause with the poets here in the present moment who happen upon a door that only looks closed but opens again and again to the Eternal Now—where departed loved ones and new possibilities await us.

Haiku helps to contain our grief and gently returns it to Nature, wherein true healing takes place. As such, haiku (and its related forms) can be considered the poetry of full catastrophe living, which points the way forward to the recovery of ordinary awe.

The Haiku Society of America is pleased to announce the winners of the 2013 Kanterman Book Awards, for books published in 2012, judged by Paul MacNeil and Paul Miller.

Epstein’s interest in the multiple sides of loss isn’t an interest in masochism; rather, he is interested in the courageous ways people confront a part of life that is completely natural. There are many kinds of loss, from simple goodbyes to the death of a loved one, and everything in between, and this volume contains them all. Life-affirming rather than morbid.


Sadly the book appears unavailable now, but you can visit his page at: