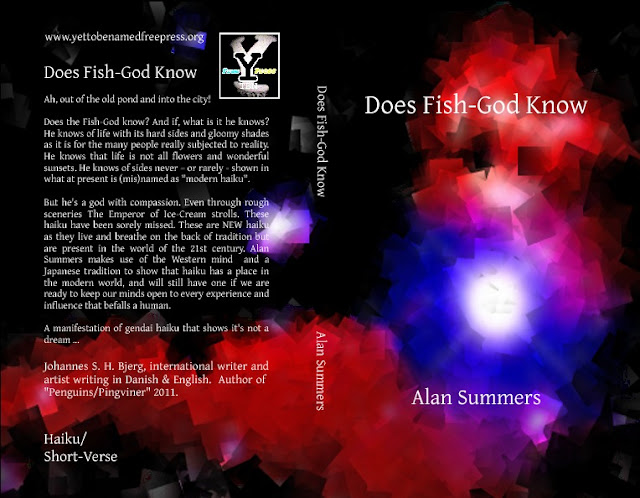 This tantalizing collection, from leading light of haiku Alan Summers, is stuffed full of unique and evocative gems. Straddling the heady border between reality and surreality are pieces such as "Toy Suns" and "Ghost Knifefish", while "Curse Her" and "Cherry Moon" throw the battle of the sexes into abrupt relief.  A must-have book for any haiku fan.
Reviewer:
Chicago-born musician, and novelist, Tracey Kelly composes music for film and media.

Susan Beth Furst:
October 24, 2020
Verified Purchase
Does Fish-God Know is a beautiful book...and then the haiku poems. One per page, white space, nothing to clutter the mind. Just the words, carefully chosen, Alan's words, his story, or ours...Alan's keen observations are expressed through rich imagery...
Ordinary moments become extraordinary, and no one does it better... The words draw you in, but you don't quite understand what they mean. These mystery haiku are some of the most enjoyable because they invite the reader to solve the mystery in her own way.
Jacob Salzer:
Does Fish-God Know is a remarkable collection. I highly recommend this book for all readers and writers of poetry, haiku, and related literature.

J. Grisetti
One of the first books I have read in the modern haiku style, having isolated myself for years. Alan has introduced both the one and two line haiku and I intend to imitate him in a sincere flattery.

Edwin Lomere
In addition to being a wonderful collection of Mr. Summers' unique haiku, this book serves as a study in how to write in the genre. The scope of moods and insights is brilliant. The use and command of the poetic line is remarkable.

Paul David Mena
Thank you for writing such a vital work.
http://area17.blogspot.com/2013/02/new-book-review-of-does-fish-god-know.html


This book is dedicated to Karen, my wife, muse, and keeper of my heart.

My many thanks also to the good people of haiku, Colin Blundell, Editor of Blithe Spirit, the journal of the British Haiku Society, who published my Does Fish-God Know title poem, which also won the ekphrastic haiku award for that issue, and to my translator Hidenori Hiruta (Akita, Japan) for breathing warmth and fire into his fine translations of my work; and to Emily Dickinson, and The Emperor Of Ice-Cream, Wallace Stevens.

[T]his book contains some of the strongest haiku written by Alan Summers, carefully chosen for their cerebral attack, backbone, humour and adaptive modelling. If you're familiar with Alan's work you'll be pleasantly surprised.

If you're not familiar with his work then you'll be rushing out to buy other titles by him.

Alan Summers is one of Britain's top haiku writers.

Ah, out of the old pond and into the city!

Does the Fish-God know? And if, what is it he knows? He knows of life with its hard sides and gloomy shades as it is for the many people really subjected to reality. He knows that life is not all flowers and wonderful sunsets. He knows of sides never – or rarely - shown in what at present is (mis)named as "modern haiku".

But he's a god with compassion. Even through rough sceneries The Emperor of Ice-Cream strolls. These haiku have been sorely missed.

These are NEW haiku as they live and breathe on the back of tradition but are present in the world of the 21st century.

Alan Summers makes use of the Western mind  and a Japanese tradition to show that haiku has a place in the modern world, and will still have one if we are ready to keep our minds open to every experience and influence that befalls a human.

A manifestation of gendai haiku that shows it's not a dream ...

Modern western haiku written by a Japan Times award winning author. Poems that will bend your mind and tempt you to re-evaluate your sense of reality. A must for lovers of experimental short-verse poetry.

The book contains a wide range of experimental haiku, regular haiku, plus short verse, as well as one line haiku.

Love "vigilante movie." Good luck with the book, I look forward to reading it -- SMA

So rich in imagery:

Many thanks to Scott Abeles and Rev. Frederick K. Boyle for their kind and supportive comments. Very much appreciated.

Love your poems , looking forward to read the book . Hopefully it's available in India with Amazon .
Good luck 🙏


Dear Bidyutprabha, many thanks for your comments. Yes, Amazon in India has the book!