All That Remains - A Book Review by Alan Summers

A book review by Alan Summers

“…a tightly spun web of Maine haiku that do not lose their joint narrative and lyrical threads…if you want to reward yourself as a reader of good poetry, you can go no further than Lee’s book.” Alan Summers

All That Remains is both the title and the dominant theme of this book. After all, everything is in transition, and this collection captures intriguing aspects which we often neglect at our peril.

The book captures a bygone era, both in landscape on a broad visual scale, as well as on an intimate aural scale.  Lee tackles landscape in original ways and deals with exterior/external and internal sub-themes.

The opening haiku works well as an introduction for the attentive reader on many levels, and is a clue for those readers who enjoy losing themselves into a good book.

hometown visit
no trespassing signs
where we used to play

There is the surface meaning of adults revisiting childhood haunts, and finding them changed; then delving deeper, there are layers of interior landscape as well as the physical geography of the countryside.  We find how it affects the individual who almost always takes a personal geography of their upbringing to new places.

Do we allow trespassers into our own private interior landscape(s), and can we as a writer, even if we are actually willing to do so?

Sense of place and identity are enduring and vital themes for writing in any genre, and perfectly suitable for haiku, the shortest of poems. One continuous theme is always a challenge whether for the writer or the reader.  The writer still has to look for variety, especially in such a short poem choice as haiku.

Often haiku are composed with one very short first line called a fragment, followed by a phrase of two more short lines.  Both sections usually create a juxtaposition of different, almost opposing images, jolting and jostling each other to create friction, tension, and resonance, for the reader to enjoy and interpret.

If the fragment is flat in textural meaning, and looks merely thrown in to start a haiku off, there is no frisson for the reader to get hold of, and shake, to see what comes out for them.  There has to be a reward for a reader willing to enter into a contract with a writer.  A flat fragment that doesn’t kick-start results in mundane formulaic layouts and templates, that are ultimately frustrating to the discerning reader, especially if they have paid good money on trust as part of that writer/reader relationship.

Here the fragment pulls us into the haiku, and the phrase apparently goes away from the subject.  But does it really?

Remember the opening haiku, no trespassing?

Do you want to be covered in rock weed, eventually to be choked.  The subtle choice of reading this as a metaphor is offered, whether by design or not.  I tend to think Lee writes direct observational haiku with a constant subtext to reward her readers. There are as many layers to a well-delivered haiku as there are labyrinthine layers to family secrets themselves.

hard frost
she remembers
how he lied

grandmother’s albums
the missing names
of all those faces

Do we need coffin and empty, are they not redundant due to the clear diction derived from the other words?  As soon I read ‘tri-folded’ I knew it would be the American flag on a coffin, possibly for a military ceremony.  Dry leaves would obviously be in an empty pool, not a filled one. But sometimes, even though haiku need not repeat the obvious, it can be a useful device when deployed thoughtfully, and when the author isn’t really, merely, repeating themselves, and the obvious.

“By the repetition of words the reader is encouraged to shift them around and consider various possible interpretations of the scene…It goes without saying that in order to work it must be done with considerable skill, or sensitivity.”
"Repetition - For Meaning and Melody"  Florence Vilen (Sweden July 2001)

This haiku is both a time-honoured shasei model where direct observation is utilised: where the power and echoes of an instant’s sentient experience of a moment is carried forward and plunged into the editing process of a draft verse to emerge as haiku.

Shasei is often the technique borrowed for film-making, where a particular object (e.g. coffin) is zoomed in, then panned out, or away, to be zoomed into another area (e.g. leaves in a pool corner) leaving layers to be excised by the reader/viewer.

Death is the natural and only definite part of life, and we should never be surprised by that fact, and eventuality. Generations of families can disappear if death is not replaced by birth and an ongoing gene pool.

Is this what the author is implying?

Perhaps the tightly crafted openness and accessibility is a gift for the reader to take more from the poem if they wish to go beyond the surface meaning. Lee’s poems are rarely one-dimensional, if ever, and most proficient writers respect their readers too much to cop out in such a manner when composing haiku. A successful haiku is multi-dimensional, and there are many in this collection worth re-reading and exploring further.

My only criticism is that although there are many haiku directly or indirectly using sound, there are scarce mentions of taste and smell.

Is this a problem?  I don’t think so, it just makes me want to embrace a companion volume from this author.  I would love to give Lee an excuse, and reason, to capture the smells of home-cooking, at the house, and out on a (possibly rare) picnic, and packed meals for those tilling the land.

Good haiku can often work on metaphorical levels as we’ve discussed.  Not every haiku needs to have a poet looking for a metaphor of course, as a reader or as the author.  Well crafted haiku work on other levels for their readers, and it’s the layers of meaning, beyond the presentation of words first delivered to the reader, that make it a haiku worth reading, and re-reading again and again.

A haiku needs an audience, and that audience should be rewarded if they use diligence in their reading.  This is the case with Lee’s work: a tightly spun web of haiku that do not lose their joint narrative and lyrical threads that delightfully entrap the most discerning of readers.

If you want to reward yourself as a reader of good poetry, you can go no further than Lee’s book. 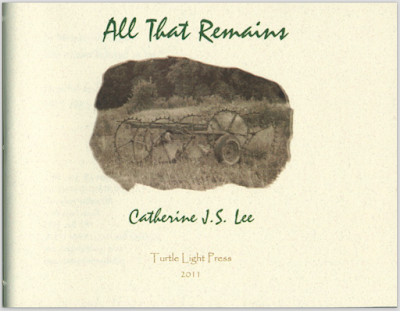