Traditional Haiku as three lines and in a 5-7-5 English language syllables pattern.

This 5-7-5 haiku (in English) has proved very popular with readers, and more than a few haiku poetry writers. So after 25 years of writing haiku with other approaches I decided to write a few this way too.

Someone recently asked me about the haiku (below), which is in a 5-7-5 English syllable pattern, and how it "flowed" together. It also prompted me to see if anyone else had 'lullaby of rain' in a haiku poem and instead came across this:  https://www.youtube.com/watch?v=0F7ZGIgNkXw


So how does the poem flow together?

We have an opening line that sets us into a rainy day. Remember how sometimes rain can be oddly comforting, especially if we are safe, warm, and secure, and we don't have the need to go outside.

Then the second line takes us away from the rain, where someone (me) is adding a spice (saffron) to something.

So we have the backdrop of rain falling in a comfortable sounding rhythm, and someone adding a pinch of spice to something so far.

And the third line let's us find out what! It's a traditional Autumn/Fall vegetable being made into soup. In fact a spicy version of Pumpkin Soup.

And so we go back to the first line, and we are in a warm cosy kitchen where we don't mind the cooler seasonal autumn rain outside, while we are stirring soup, and possibly other things like a main course.

We have sound (rain), touch/sensation (another pinch i.e. finger and thumb), taste (saffron/spices taste test, is the soup spicy and seasoned enough), and smell, when the soup is both cooking, and filling the room with aroma, and as we bend down to test the soup with our nose, and later again, when we are sat around the table with our soup.

This becomes a traditional haikai verse because we have the strong suggestion of the season, that of Autumn/Fall, with "pumpkin". And if you look up about saffron, it comes from an Autumn flower called crocus, so the whole poem is a celebration of the new season (Autumn in this case) and though not warm, or hot, it has its own gifts to bear.

While there is a soothing sound of rain, we are safely inside a warm comfortable kitchen. We are surrounded with a comforting rhythm of rain (outside sound coming in) and with the scent and smell of a traditional Autumnal soup.

The haiku has been published and anthologised etc... many times, and read and appreciated by many readers, both regular haiku readers, and those new to haiku.

The editor Scott Mason, of The Wonder Code, told me:
"I hadn’t realized that your poem was 5-7-5 — a tribute to your craft, Alan!"

And went on to say that "...there are a sprinkling of others in the book as well, including three of mine. Thanks for your kind words." - Scott Mason

Delighted to have had this success with another 5-7-5 haiku!

Deep end of winter
a swan’s luminosity
enters the river

Note:
Scroll further down, towards the end, to see more of my own published examples of "5-7-5" haiku.

It’s great to have a crack at haiku which is so different from other short genres or forms of poetry. Although modern haiku does not require a 575 count in English unlike most (but not all) Japanese haiku, it is occasionally worth attempting.  But avoid the many pitfalls!

One pitfall is the awkward enjambment, which can work so well in other genres of poetry, but not so much in haiku.

The running-over of a sentence or phrase from one poetic line to the next, without terminal punctuation; the opposite of end-stopped. William Carlos Williams’s “Between Walls” is one sentence broken into 10 enjambed lines:
https://www.poetryfoundation.org/learn/glossary-terms/enjambment


Where enjambment might work well in free verse etc... it can work against a haiku poem, especially if it is used merely to make a forced syllable count, for its own sake, and not for the sake of the poem itself.

Cutting a line off abruptly just to make a 'syllable count' in a particular line such as the attempt to make a 575 syllablic stanza/verse might be good for a longer poem of many such verses, but it can lose the ability to be called a haiku.

Here's a made up 575 verse/stanza that I've created as an example and would never call a haiku.

Neither could it be called any kind of related haikai verse such as hokku (as written by the Classic Japanese poets like Basho, Chiyo-ni, Buson, Issa etc...) or internal renga verses.

The example above is deliberately clumsy and clunky. It may well work as a funny standalone poem, or part of a longer poem of many verses, but it is definitely not haiku or hokku, or an internal renga verse. It could be termed a 575verse perhaps, but as you can see not all "575verse" are haiku.


Here is one just for fun!
I collected a number of collective terms for geese and added them up together for a 575 haiku.

Skein is actually short for the Old French escaigne, which meant a hank of yarn that, when folded back on itself, resembles the ‘v’ shapes with which geese transcribe the sky when locomoting long distances.

That geese in flight are also referred to as ‘a team’ or ‘a wedge’ both reflect the graceful birds’ distinctive mode of travelling en masse.
‘An Unkindness of Ravens: A Book of Collective Nouns’ is published by Michael O’Mara (£9.99). Another useful volume is ‘A Conspiracy of Ravens: A Compendium of Collective Nouns for Birds’, with illustrations by Thomas Bewick (Bodleian Library Publishing, £9.99)

There is a serious note behind the fun haiku though.
The United Nations and other organisations made 2018 the Year of the Bird, something that was vital as we are killing too many of them.
https://www.unenvironment.org/news-and-stories/story/spreading-word-migratory-birds


Here's an example of another kind of haiku in a 575 syllable pattern, which was selected by one of the world's top haiku magazines outside Japan: 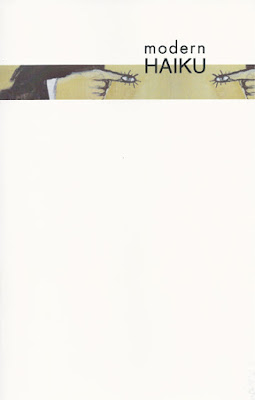 The night of small colour haiku was also selected as one of the top 100 haiku (out of thousands) from 2014 to appear in: 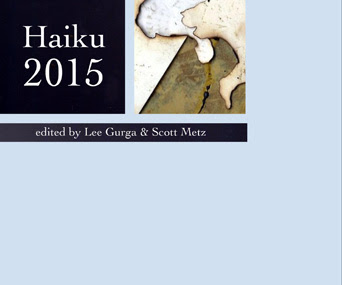 The short verse poem is a haiku NOT because it has a pattern of syllables in 5-7-5 as much as it secures kire and vertical axis.

The vertical axis deals with the under-story, or sub-text, or extra-narrative strings, of a haiku, whereas the other axis, (the horizontal axis) is the surface story (or a part of the deeper, embedded, narrative) that we can read on a surface level.


Regarding the under-story of the haiku:


A reader does not have to see beyond the surface level of this haiku to feel it's a particularly dark and badly illuminated night that followed twilight, and that can feel like a netherworld, separate to our normal day to day existence.

See also the Poetry Pea piece that includes this haiku:

The haiku is also anthologised in this anthology that has a section on 575 haiku by numerous poets, and all proceeds go to two charities, plus Yanty's family. 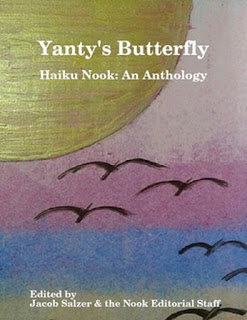 night of small coloura part of the underworldbecomes one heron

This haiku now also appears in a new groundbreaking anthology: 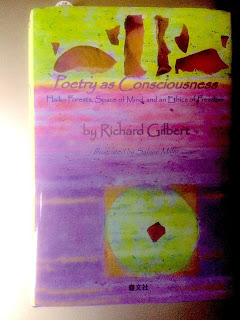 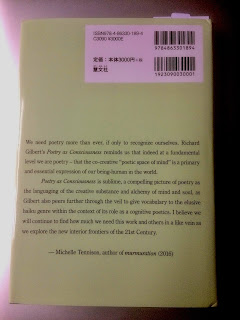 Richard Gilbert says this, regarding the (575) haiku:

This haiku is classified as mythopoetic reality.  The mythopoesis [is] evident in the semantic twist of “small colour” of night, a part of which “becomes on heron.”

What lies between realism and imagination, between living and dreaming, [as] a particular form of sanctuary; a space of poiesis. It seems most most fragile and nuanced, insignificant and ephemeral—yet it calls or we call, in seeking deeper, more enriching, increasingly multiple, multifarious dimensions of knowing in psyche.

Wallace Stevens refers to this poetical process as “enlargement”.


See more of my own haiku in a 5-7-5 syllable pattern further down.

Although it's normal and natural to follow a 5-7-5 pattern in the Japanese language, and this can be seen with wet floor signs, traffic update messages, and other public notices, conversations, and in all kinds of written creative pieces, it doesn’t mean that every 575 utterance is a haiku, it may just be telling you a shop floor is wet and slippery!

Oh, and traditional haiku, that is, originating from Japan, is commonly written in one line. It’s more of a Western thing to write in three horizontal lines.

So if you still wish to pursue an attempt at 575 in a language other than Japanese (which has three language systems and no alphabet) please always consider including articles (a, an, the) to avoid the poem containing abruptness. 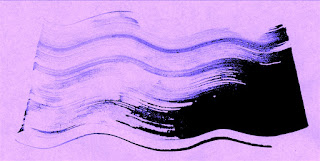 I've been studying and writing haiku for twenty-five years and only considered producing my own examples of 575 in the last few years to help guide others who start off that way.

Here's a little piece in progress about 575 haiku in English including a few of my own haiku in a 5-7-5 pattern:

There are examples of traditional Japanese haiku slightly breaking the rules (hacho) with jitarazu (insufficient syllables) and this has been witnessed since the time before Basho right up to the 21st Century: And it’s the same with jiamari (excessive syllables). In fact some Japanese women sometimes write tanka (five line poems) shorter than haiku, and haiku longer than tanka!   575 is just one way to write a haiku.

Okay, so still willing to attempt haiku and in a 575 pattern?  ☺

Just because we are going to make contemporary haiku (in English) longer by going for the 575 syllable count, we should still pay attention to various useful devices.

Always think of the white space, the non-text part of a poem on the page or screen which is just as important as what can be seen and read because it carries its own meaning:

I can write 575 haiku in English syllable patterns although I don't see writing anything in 575 as a challenge, unless they contain certain key components like kiru (cutting) and kigo (seasonal/socio-cultural references), and they have to be tight.  Writing crafted haiku is indeed a discipline in itself, and a syllable count is only a small part.

Here are a few more of my 575 haiku published in reputable poetry outlets:

watery sunlight-
the flower’s fidelity
with a bumblebee

lazy afternoon-
I drift along with the breeze
and dandelion seeds

So an altered version taking it to a number count of 5-7-5:

The days of Japanese haiku writers being arrested for not doing a 5-7-5 count aka "5-on" "7-on" and "5-on" are long gone, but even 80 years ago some poets in Japan were tortured, sometimes to death, for veering away from what was perceived as patriotic Japanese haiku.  The truth is that poetry scares politicians, and their corporate sponsors.

Forgive, But Do Not Forget: Modern Haiku and Totalitarianism
Itô Yûki talks with Udo Wenzel
http://www.haiku-steg.de/pdf-Dateien/Forgive.pdf

Also, regarding the patterns of 575-on, more natural to the Japanese tongue, think of them as patterns of 5-mora 7-mora 5-mora:

I touch on the complex multiple systems of the Japanese language alongside a report on my judging of the New York based organisation World Monuments Fund and their second haiku competition.  Oh, and enjoy the video too!  ☺

More than one fold in the paper: Kire, kigo, and the vertical axis of meaning in haiku
by Alan Summers
http://area17.blogspot.co.uk/2014/04/more-than-one-fold-in-paper-kire-kigo.html