The Beat Is Back haibun (prose and haiku) inspired by Jack Kerouac and On The Road, Old Angel Midnight, and Dharma Bums, and history of haibun

The Beat Is Back

A man sits in an IRT Subway train reading a newspaper with a hole in it. He has hours to kill. Only a four year old looks back, and into, the newspaper hole.

It’s now night outside so he folds the newspaper, sticks it into a voluminous raincoat pocket, and decides to step off the train and leave the station. He hasn’t seen Times Square for many years, it hasn’t really changed. This is the hub of New York City where the Beat Odyssey began.

mountains
we aren't the people
you think

He hunches his neck into his coat, and starts to stroll, eyeballing from side to side as he does so. The man moves past all-nite movie houses, cafeterias, and Pokerino arcades, stepping around a puddle that reflects back a giant coke bottle from an overhead sign. Neon mashes up other pools and signs.

the threatening clouds
an imaginary dog
takes a walk again

He nods reflectively to the quick-change artists, the conmen, and hustlers of every kind. This man is a broad-shouldered ex-footballer, with just a hint of a broken nose, and a scar, from a small knife, that cuts diagonally across his left cheekbone less than an inch before looping into itself. He walks the in- betweeness of virga and luminosity of front shop signs; passing soldiers; sailors; panhandlers; drifters; thieves; junkies; sportsmen; gamblers; racing touts; zoot-suiters; and the local hoods.

threading clouds
another time
in another place

Across the way is Chase’s Cafeteria at 210 West 42nd Street, to the left of the New Amsterdam Theatre marquee, but it’s the cafeteria he enters.

passing cars
the gleam off bare wood
on Good Friday

More hoods mill around as he shoulders the door quietly open: there’s no girls in sight, just men with red shirts or zoot-suits.

There was one who stood out, selling syrettes of morphine, but was this the Virgil of The Beat Movement? He didn’t buy.

He mooched into a booth, and nursed a coffee and whiskey for half an hour, head down. No one came over, except the waitress, to heat up the coffee with a short refill.

different uniforms
the condensation
of all things

The place was buzzing, but not to his own particular satisfaction. He left to walk over to Bickford’s Cafeteria, on the middle block of West 42nd Street; this is where Kerouac believes the greatest stage on Times Square resides, he thought. In the window seat is a man bent around a chipped mug containing thick dark syrup, he has typical eighteen hour shadow, around his eyes, that matches the tone of his unshaven jaw line.

someone kicks
a fridge full of things
shut again

The window man looks up, nods, sinks back into his syrup drink, but also starts scratching his insect T-shirt.

“You Angel, coming for me?”

“No, just a once damp hitchhiker trying to be a pocketbook poet, is that okay?”

The bulge under his jacket was three finished notebooks, but it was good that the other cafeteria clientele of pimps, thieves, numbers men, all left him alone. It looked like a gun that could blow holes all the way through the building and hit the highway out of town.

In the submarine light the hydrogen jukebox played across cigarette smoke and burnt coffee, and the man took out a greasy cover notebook to scratch more words inside.

The window bum looks out of the corner of his left eye:

Jack’s out in circular jazz time, side-stepping the Shrouded Traveller, looking for new places. Not all white doves in Chinese windows are groceries. It’s all five six seven to me.

rainy season
one of the paper towns
gains a wrinkle

NOTES:
Haibun - the practise of interspersing prose writing with haiku.  Prose pieces can be in numerous styles from journalistic writing, diary entries, prose poetry, long fiction through to flash fiction, that usually include one or more haiku within the body of prose, or starting or concluding a body of prose.

The Beat is Back haibun is part inspired by Old Angel Midnight, a long narrative poem by Jack Kerouac:
https://en.wikipedia.org/wiki/Old_Angel_Midnight

And inspired by this On The Road quote:
“Last night I walked clear down to Times Square & just as I arrived I suddenly realized I was a ghost - it was my ghost walking on the sidewalk.”
(Part.Chapter.Paragraph: II.5.4)

Jack Kerouac Reads from "On The Road"
https://www.youtube.com/watch?v=_MjPtem6ZbE

The Interborough Rapid Transit Subway, or IRT, was the first subway company in New York City. Even with elevated train lines springing up around the city, the need for an underground rapid transit railroad was obvious as a solution to street congestion and to assist development in outlying areas. On October 27, 1904, the first IRT subway line opened, and the city would never be the same.
http://www.nycsubway.org/wiki/The_First_Subway 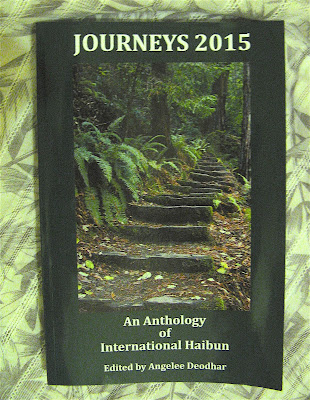 As Call of the Page Alan can offer haiku and tanka one-to-one sessions:

The days and months are travelers of eternity, just like the years that come and go. For those who pass their lives afloat on boats, or face old age leading horses tight by the bridle, their journeying is life, their journeying is home. And many are the men of old who met their end upon the road.

It was the twenty-seventh day of the Third Month [16 May]. There was a wan, thinning moon, and in the first pale light of dawn, the summit of Mount Fuji could be dimly seen. I wondered if I should ever see the cherry trees of Ueno and Yanaka again. My closest friends, who had gathered together the night before, got on the boat to see me off. We disembarked at Senju, and my heart was overwhelmed by the prospect of the vast journey ahead. Ephemeral though I know the world to be, when I stood at the crossroads of parting, I wept goodbye.

So that year – the second year of Genroku [1689] – I had suddenly taken it into my head to make the long journey into the deep north, to see with my own eyes places that I had only heard about, despite hardships enough to turn my hair white. I should be lucky to come back alive, but I staked my fortune on that uncertain hope.

Your haibun is wonderful Alan - such evocative detail with physical and interior landscapes so densely embroidered into a gripping narrative. Just love it. Jeanie