ekphrasis - poetry and art, and when haiku met art

our dialogue as a haiku poet with art


There are many ways into writing about a particular artwork. See towards the end a guest appearance by Patricia McGuire reacting to an artwork by George Segal.


For instance, what memories, from childhood or young adulthood etc... are evoked by a certain painting or other artwork you saw somewhere?

If it's a tanka there is more than room enough to add the title of a painting, and maybe the artist's name, and to a certain degree that can also be done in a haiku.

Monet’s Haystacks
a group of crows tug
at twilight

such old steps
I water the sunflowers
for van Gogh

4-line haiku from a talk at Victoria and Albert Museum about Japanese art, and in particular netsuke (pronounced 'net-ski).

The aubergine netsuke at the V&A:
https://collections.vam.ac.uk/item/O229500/netsuke-unknown/

netsuke...
the hare with amber eyes
jumps back in again

Siena rooftops
sketching the shapes
in my mind

The rooftops of Siena, Italy:

Description by Karen Hoy:
I was walking home on an autumn day, and noticed that someone had chucked a teabag into the fallen leaves accumulated where the flagstone pathway met people’s front garden walls.  I had to think for a moment about why the image piqued something in me – it was a sludgy brown colour among autumn shades – it didn’t stand out.

But then I realised that the tension was between these exotic cast-off leaves [tea being the dried leaves of a camellia bush, I believe] and the local autumn leaves.  And I had the image of some tragedy, of a decline, but without a loss of self-respect or dignity.  A sort of forbearing.

I must have been influenced by the title Madame Butterfly too.  Also the film “La Dame aux Camelias” where the heroine has tuberculosis (which I think subconsciously linked to the dampness of the teabag – I can’t remember whether the autumn leaves were damp or dry, I think perhaps they were in-between).

When we attempt ekphrastic forays, into the landscape of painting, haiku could be seen as two brushstrokes frozen in mid-air. Or, using another analogy, while attempting to capture the energy of painting, it’s not unlike the techniques made famous in The Matrix movie; freeze frames that an actor moves around, at will, while everyone and everything else is an individual ‘still life,’ or an intimate and suspended panorama.

When I write about a painting through my own poetry I am both telling a story, but also attempting to tell a story, all at the same time.

[T]ravel the paintings, hear the echoes in between, and tell your own story too.

Afterword extract from Alan Summers from the book:
Ekphrasis Between Image and Word 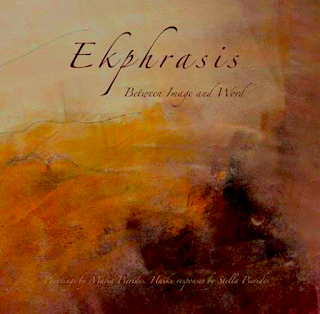 Ekphrasis: Between Image and Word
https://fruitdovepress.com/ekphrasis-from-image-to-word-2/
by Maria Pierides and Stella Pierides 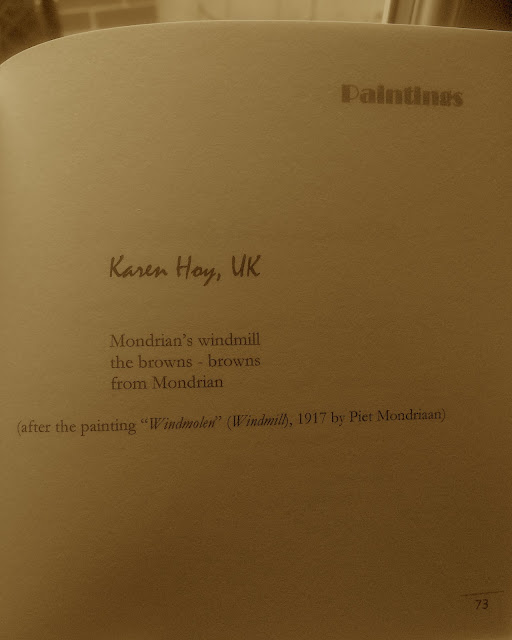 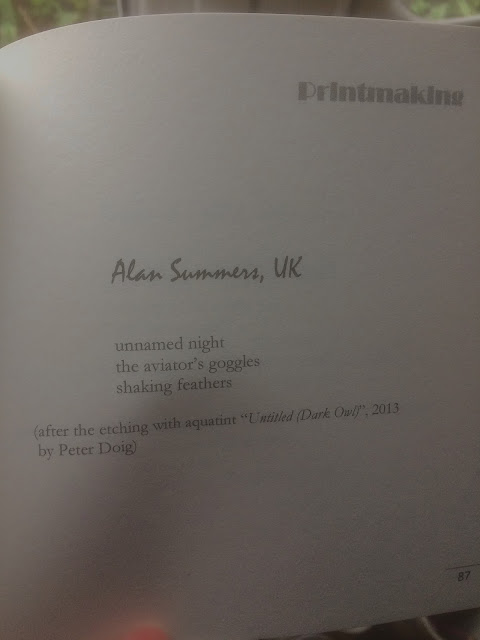 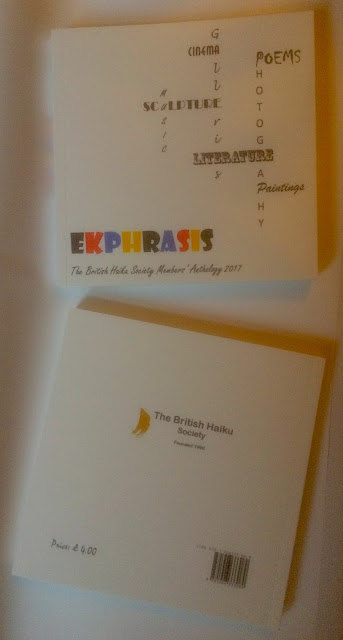 Wonderful guest Patricia McGuire has provided us with an intriguing ekphrastic response to a famous artist - see links to George Segal further down.

Patricia says:
"It was inspired by the piece “The Bowery” by George Segal 1970 and is in the Kunsthaus in Zürich."

"I don’t think of it as a description of the sculpture, but rather it is a little story inspired by what I saw, and coloured by my experience of living here in Zürich. I think that qualifies as ekphrasis, but you might think differently, and you are the expert."

I (Alan) said:
"Well, even before I looked up the particular artwork, I got an instant spark off the verse. Perhaps because I've been both an artist (as a mosaicist, knowing time, even a whole day, could drift into night), and of course as a painter & decorator a la general builder with equally long hours sometimes."

"The figure is not a beggar, but someone to my eyes, who has succumbed to alcohol to such an extent they have lost probably their livelihood (office career, teaching, painting as an artist, or construction worker etc...)."

"I knew a fellow general builder who succumbed to excessively joints of ganja, and boozing, it was such a huge shame for this man to diminish himself."

We can immediately form an impression with the first line, and some readers will see an artist, some may see a decorator.

There is that concrete image, the names of everyday things, and a painter is a common sight where houses are being built or renovated. We also see the artist works of painters in various gallery shops, and also shops that sell greetings cards of famous paintings.

sleeps on his shoes

I can imagine someone swaying on their feet, in between full sleep and a blurry wakefulness. I've been there myself, especially working a 23 hour day!

I remember watching bio-pics of the famous artists, how they laboured long into the night, and collapsed through exhaustion, and perhaps strong liquor.

I am jolted from my romanticising the scene. It's an abrupt scene changer, which juxtaposition can achieve, like ice-cold water.

Are these burns on his or her fingers, forgetting they are holding a cigarette in one hand? Is it a long burning cigarette left balanced on the edge of a table, that also holds absinthe or brandy?

Are they self-inflicted burns? Are they the last cigarette's burning effect as the artist collapsed into or near their bed?

Is the artist finally so destitute they are on the street, homeless without a patron?

When I couple the verse with the artwork I obtain further insights (mine alone, other's will be different). It's a man abandoned, not just by his family and friends and associates, but by himself. Another man casually watches the sprawled out figure lying near him, and smokes a cigarette.

When I saw the artwork it immediately appealed to me, and I could feel I understood why Patricia interpreted it in her own way. It worked immediately as a standalone verse and as an ekphrastic reaction.

Here is the startling artwork, where I find the
black and white version most effective:

Here, other artists (photographers) captured the misfortunes and desperation of fellow humans:

New York City In The 1970s: Living It Low In The Bowery


When Leland Bobbé shared his pictures of 1970s New York City we loved them so much we split the gallery in two. If you’ve not seen his photographs of Times Square: Peep Shows And Pimps, please do check them out. In this gallery we see snapshots of New York’s otherworldly Subway system, China Town and The Bowery before the money moved in and the cool kids started to dress like they were grit-poor.

The artist often captured various people, not just people who were alcoholics but
those desperate from poverty: https://flashbak.com/new-york-city-in-the
1970s-living-it-low-in-the-bowery-photos-51442/

photos of the Bowery:
http://alturl.com/3ns63

I said to Patricia that as a professional Mall Santa I would travel into my old home city of Bristol (England) over November and right up to and including Christmas Eve and there were so many homeless, in various conditions, so this
interpretation worked powerfully for me. It's got good complexity whether matched with the artwork or not.

I derived a powerful amount of feeling and meaning from Patricia's verse which she helped make possible because she reacted so closely and meaningfully with George Segal's artwork.

Thank you Patricia for allowing me to post your verse.

Patricia lives in Zürich, Switzerland. A Londoner by birth, when
people ask her where she is from she says she is Swiss, with Irish
blood and an English heart. (Apologies to Morrissey.) She splits her
time between professional recruiting, podcasting and writing haiku
and stories for young adults.
You will find Patricia's podcasts at:
www.thecareerace.com and www.poetrypea.com

Online courses, and events at Call
of the Page with Karen & Alan:

Karen & Alan run ekphrastic online courses for both haiku and tanka from time to time.
If you might be interested, drop a line to Karen:
admin@callofthepage.org