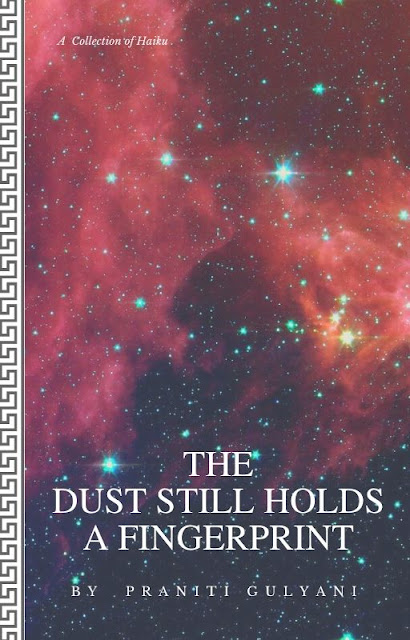 I’m proud to be able to say that I suggested the book title which the author loved!

From my foreword to the book, here is how I sum up this up and coming new poet:

“This is an excellent debut collection of haiku, and I heartily recommend it for everyone of all ages. The work is precise and incisive showcasing the skills and craft from such a young voice.”

And now I hand you over to Praniti Gulyani herself!

I come from the heart of India, the capital city – New Delhi. I was introduced to haiku by the poet Kala Ramesh in 2017,  I have been obsessing over the form ever since.

A few months after venturing into haiku, I developed an interest in haibun, a 400 year old art. I would like to begin my feature by quoting a haiku from each of my two mentors: Kala Ramesh and Paresh Tiwari who have guided me through haiku and haibun respectively. These two haiku can be seen as the absolute inspiration which led me to haikai poetry.

fireflies . . .
for a while my garden
mimics the night

paper moon. . .
a cliff-diver folds
in the setting sun

Kala Ramesh
Beyond the Horizon Beyond

And now to her own work, with comments by Praniti Gulyani!

shooting star
nothing really
to wish for

In today’s world, satisfaction is somewhat unattainable. For me, satisfaction is defined as a conversation with a loved one, a good haiku publication and a hearty meal (preferably something sweet to conclude) . I think the inspiration point for this haiku came on one such satisfying day, when I felt as though I had all I wanted, and even if I had an opportunity to make a wish (a shooting star), I would not have anything to wish for.

lonely evening…
slowly getting used
to myself

This haiku came from many places, or rather, many points of loneliness incorporated within me. I guess the composition of this haiku was a slow process, as I realized the beauty of ‘getting used to one’s self’, getting acquainted with one’s own whims, longings and desires.  For me, this haiku highlights the solitude I have always longed for, and further emphasizes on the joy of ‘getting used to myself’.

falling rain. . .
imitating the way
she says my name

The inspiration behind this haiku is my primary school English teacher, Kavita ma’am, the very first person who told me I could write! She has a tendency to pronounce my name by emphasizing on the ‘I’, and hence calls me ‘Praneeeti’ rather than ‘Pran-i-ti’! Even as a child, I loved the way she would pronounce my name and would often imitate it, because this particular pronunciation made my name sound so very unique. It is strange though, how a six year old practice can inspire haiku, but I guess, that it is the beauty of the form!

long journey . . .
the moon no longer
by my side

This haiku comes from a very deep place, and I see this haiku not as a poem, but as a close friend, a companion and a mate. There is a small story behind this specific haiku and I want to narrate part of it over here. When we go on long journeys, we can observe the moon ‘accompanying us’ at the window of our car, but when we enter a twist or a turn, the moon tends to ‘go away’. My haiku is inspired by all those moments in my life, when the people I held closed chose to  move away, leaving me on my own

HAIBUN
with comments by Praniti Gulyani!

Okay, now I would like to gracefully present my first love and reason for survival…’HAIBUN’!

If I can write any good haibun at all today, I owe it all to my Haibun mentor, who is Paresh Tiwari. His constant guiding has helped me shape my work, and by composing such beautiful and magical poetry himself, he has inspired me to reach for the stars!

When father came back from the far, far land where he had gone, he came with a pocketful of shadows. And just as I put my hands into his pockets to see what he had got me, the shadows dripped down, forming small puddles around my feet.

There were all kinds of shadows—shadows of revolvers, bullets, shadows of grass-blades, of dew, of overturned bottles, of baskets, of rough, dry beds, of cardboard, of medicine-strips imprinted with the smallest lettering. . .

"I bring you my life, son," he said, smiling, "a life which you too will have to live one day. Tell me, which part do you like best?"

first champagne…
a new fullness
to the moon

I am not happy with most of my works (like most writers) but I am very fond of this particular piece. I have developed a different kind of relationship with this piece and I am proud to say that every time I read it, I tarry a while and wonder ‘Whoa! Did I write that?’ I have always been deeply influenced by the lives of soldiers and war veterans, so I think this haibun stemmed from that point of concern. The haiku, I must mention, is inspired by a scene from The Sound of Music, where Liesel asks her father if she could ‘stay and have her first champagne’ and her father bluntly says, no! I think this haibun captures the bittersweet moments of growing up, some moments which I have experienced too!

Tears Of  A  Different  Kind


I have cried many a tear, but never a tear of this kind. A heavy weighted tear, that pulls down the eye lid, and the eye lash, but barely touches the white sands of my eyes. A tear that fills up within, but does not slide down the cleft of my cheek, and just teeters on the absolute tip of it.

It has always been words and words alone that ignite tears within me. I have always cried because of someone, but not for someone. And, I wouldn't call this crying. It's just  a sudden, uncanny wetness, and hollowness, emptiness, the feeling of being numb, injected by the permanent anesthesia of failed emotion.

Yet, I know deep within, that this is so, so much more than momentary moisture.

graveyard...
wondering how to mourn
for myself

All of us have had a myriad experiences in our life. Not all experiences have been particularly delightful, and not all experiences have been absolutely sad either. But, it is strange --- how the experiences which seem the ‘saddest’ of all can actually inspire some true, heartfelt poetry. ‘Tears of A Different Kind’ is extremely close to me, because this haibun actually ‘happened’ to me. I actually cried ‘tears of a different kind’ for someone, and even as I write this, I can remember the heaviness of those tears. It is something which I can never, ever forget no matter how hard I try. In the heart of this haibun, I can actually relive the heaviness of that tear, and thus this piece is so close to my soul.

After mother’s retirement, I often found her standing at the balcony, gazing at the sunset. She would stand for ages, watching the shift of colors in the sky, missing out on her evening tea, and completely oblivious to our calls.

"What is it….about the sky-gazing these days?’ father asked her last evening, as she stumbled inside, her eyes misty and dazed."

"Isn’t it fascinating…" she began, her voice rising and falling. "The sky is so brilliant in the day, flaunting its azure crown with pride, but towards the end of the day, it gracefully succumbs to the orange and scarlet hues, allowing them to overtake its azure shade, without putting up a fight."

old bookshelf...
the dog-eared pages
of the fairy tale book

There have been generations and generations of writers and poets before us. We have had poetry about happiness, sorrow, love, anger --- or rather, all the emotions that are direct. And, as they say, emotion is the mother of poetry. In my haibun ‘In The End’ I have tried capturing the grey areas between emotion, the obscure portions of our heart, the little regrets, sorrows and desires, and how closely emotion is linked to nature. In my haibun above, I have attempted to throw light on the link between our obscure emotions and the nature that surround us.

Little girls come into this world as small bundles of pink. Maybe, I too, was a pink bundle. But, I have thought often about what did my mother think of me when I was placed in her arms, red faced and crying. Did she know that in her arms, she held a child who would grow up to be no less than a druggie, a hard core alcoholic, drunk on words and poetry? Did she know that I would not be the sensible student that she was, I would fail in math, while she had topped, I would be baggy and careless, while she had always been perfectly fitted and neatly combed? Did she know that this howling infant would come up to her fifteen years later, and say that "I don't like economics, maths does not interest me, I have decided, I am going to study literature and become a writer. I am sure... "

Maybe she was shocked that day. How could her daughter take to arts, and be so sure of her decision? And that too, so early? Was I depressed? Was I a recluse? Or even worse, was I socially awkward?

A day ago, I saw her with an anthology in her hands. One of my haiku were published in there. I see her finger softly touch my name. The gesture is ever so gentle and ever so slow. It is just as though she is brushing a curl away from my forehead, all those nights I spent in her lap, burning with fever....

"This is... " she says, her voice breaking. I see a tear drop off her cheek, and softly land of my name. It is a momentary magnifying glass, as it falls on my name, making my name seem all the more bigger....

first kick...
her world jerks
to a halt

This concludes The Area 17 Profile Poet piece about  Praniti Gulyani but keep checking as we have another exciting feature from another part of the world at a later date!

Thanks on behalf of Praniti!