I found this hanging up on a wall in a Japanese cafe:

No mention of Basho as the author of the original Japanese poem on the poster, or that this is a translation.

When I Googled, I found that Inazo Nitobe, the famous Bushido author, did translate this, and the poster simply leaves off Basho's name as the original author.

"Perhaps Bashō wanted to emphasize natural growth as a force of solace and renewal – seeing the summer grasses at Hiraizumi as a reason for hope as well as melancholy; hence “deep” would perhaps seem too dark and brooding a word."
A Dream of Ruined Walls by Paul Rouzer, University of Minnesota
http://simplyhaiku.com/SHv4n2/features/Rouzer.html

I personally visited the area which Basho wrote about in his Summer Grasses haiku, but alas there was no marker to the famous haiku & battle.

Summer grasses,
All that remains
Of soldiers’ dreams


these summer grasses:
the remains of warriors
with their dreams

I feel the verses of Basho’s time can often carry a power beyond their original intention. Matsuo Bashō did what a lot of poets would want to do, and that's to visit important places, including temples and shrines, and old battle scenes. I’ve been to the battle scene this haikai verse refers, and it was still overgrown with grasses, but years later it may now be developed. The poem has often been adopted, although it was not its intention, as an anti-war or certainly not pro-war haiku.

The "warrior's dream" verse can refer to the Fujiwara clan and the samurai soldier/warrior Yoshitsune: https://en.wikipedia.org/wiki/Minamoto_no_Yoshitsune#Rumors_and_legend

"Tsuwamono (兵) - An old term for a soldier popularized by Matsuo Basho in his famous haiku. Literally meaning a strong person."
http://www.jref.com/glossary/samurai.shtml

'tsuwamonodomo' is the plural for warriors, so Basho can mean both all the soldiers involved in a specific battle as well as just one major warrior.

In actual Japanese, the haikai verse, to a Japanese haikai reader of the time, contains an incredible amount of information because the reader could fill in the gaps.

In contemporary society (both Japan and the rest of the world) we might have to carefully juggle what readers might not know. But then again, with internet access, we need take only 2-3 seconds to learn something nowadays! 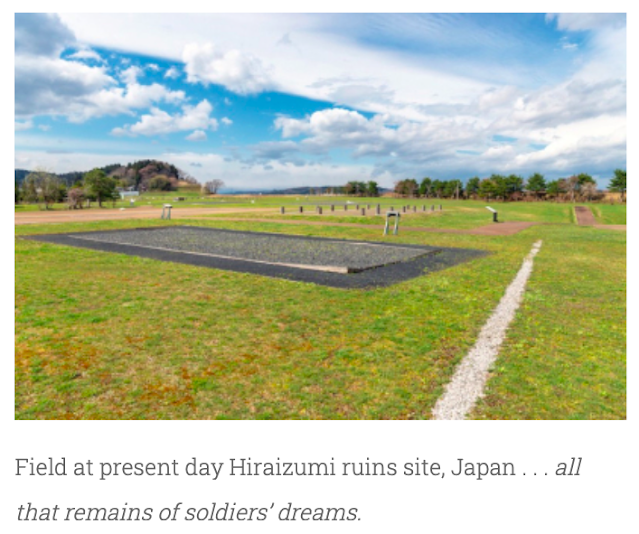 Do consider visiting this blog page:

The Tragedy of Hiraizumi


Another Summer grasses haiku, and powerful in its context of the dawning of the industrial age in Japan is:

summer grasses—
the wheels of the locomotive
come to a stop


A Sample Page of The Essence of Modern Haiku including notes plus Japanese characters and romaji: 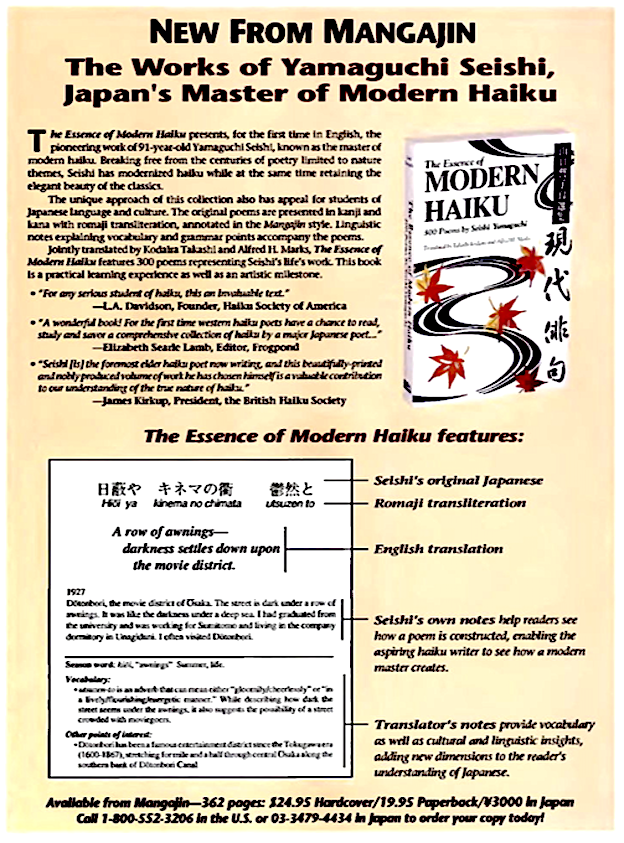 Well at least is good to see a translator getting recognition.

Presumably, in Japan, it goes without saying who the original was by?

Fortunately nowadays translators get more recognition, and are treated as a co-writer, which is a good thing.

Schoolchildren are taught about a few famous haiku at primary level, but whether they would know the 'summer grasses', especially in English, I wonder.