Photos and Events Report for the 2010 Bath Japanese Festival 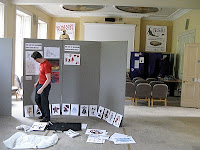 So many highlights, just a few:
Courtesy of our sister festival  International Haiku Spring Festival 2010 we have special guests Masuda Aika（桝田愛佳）a haiga painter, and her mother, Masuda Junko（桝田純子）a haiku poet, came over to give a taste of haiku and haiga from Japan. 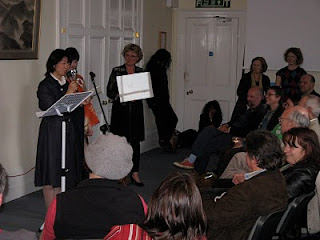 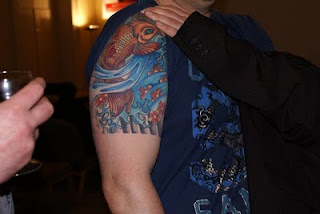 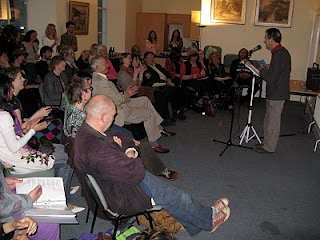 Lee Coombes shows off one of his Japanese tattoos to the audience.
photo by Mike Keville (London)


David Johnson, always popular with audiences, brings his own magic to the event. 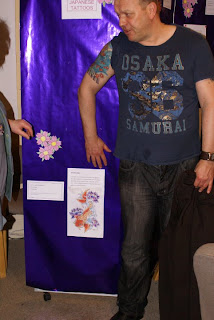 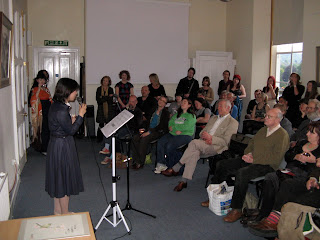 There was something for everyone, from readings from poets and other live word artists plus the Origami Picnic Corner, and Usborne Books for children.

The launch night was both a taster of the festival as a whole, as well as a plethora of mini-exhibitions and activities from

*** ORIGAMI PICNIC CORNER! ***
Fabulous Joanna Tinsley and her "the love of it" magazine team ran an origami animal-making workshop packed full of children and adults alike.

They provided the paper (in a choice of colours, prints and textures), a bunch of clever origami experts and a cosy corner in which to fold. All you needed was a home for your paper creation to go to at the end of the night.  Weblink: The Love of It magazine

***HAIGA (haiku painting and calligraphy)***
*Haiga and haiku straight from Japan (Akita, Northern Honshu) with Masuda Aika（桝田愛佳）a haiga painter, and her mother, Masuda Junko（桝田純子）a haiku poet, giving a taste of haiga art with haiku.  16 year old Aika, and her mother were a big hit with both the exhibition audience, and in the poetry and liveword room.

Karl Jaeger (Modern Japanese Paintings especially for the launch night) is a BRSLI founding member in 1968, and now Co-founder, Trustee and Chairman of Our Future Planet (OFP)

*** SPECIAL LAUNCH OF JAPANESE VIDEOGAME ANIME IMAGES***
Joe Ryan presented/exhibited Anime artwork (cells) from Zen United, the team behind the European release of Blazblue - Calamity Trigger displaying a selection of concept art which documented the creative process of game development. Blazblue - Calamity Trigger is a hugely popular video game with a very recognizable anime style. The Japanese developers are very proud that the European gaming press have been raving about the quality of not only the gameplay but of the rich artwork.

To compliment the exhibition also supplied the Japanese book binding course with a selection of drawings which will be used in the learning process: http://www.blazbluegame.com/ 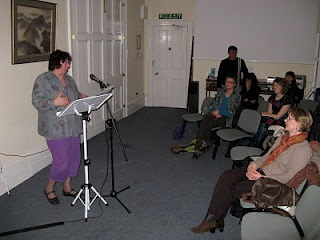 Hazel Hammond reading some of her tattoo poems.


Nikki Bennett, Uni-Verse Poetry Group organiser, and host for the festival launch made everyone welcome and gave a reading in her own light as a highly regarded poet.

Alan Summers - a short welcome from the founder and director of With Words <http://www.withwords.org.uk>, and Literature Director of 2010 Bath Japanese Festival and to ensure you know about all our fun corners.

This was followed by a joint reading by Alan, and Karen Hoy, of With Words, from one of their recent renga poems from an ongoing NHS MSU project.

Rachel Carvosso of Tokyo Art Beat & Japan Editor for Bristol's The Love of It; and co-organiser of the 2010 Bath Japanese Festival read poems and gave a curatorial talk on the contemporary Japanese book-binding (and workshop) exhibition courtesy of Bath Central Library which With Words are in partnership.

***SPECIAL GUESTS FROM AKITA, NORTHERN HONSHU, JAPAN***
Courtesy of our sister festival The International Haiku Spring Festival 2010, and With Word's guests, Masuda Aika（桝田愛佳）a haiga painter, and her mother, Masuda Junko（桝田純子）a haiku poet, gave a taste of haiku from their hometown Akita. After the break, most of the audience immediately went to their haiga art corner to hear more Japanese haiku as well as have haiku written in calligraphy alongside Aika's paintings she created for each person.

***SPECIAL GUEST APPEARANCE***
Carrie Etter opened up our second set to read haiku and senryu from her collection in progress since 1987: "The Broken Kite"
Carrie's latest collection "The Tethers" £7.99 Paperback (ISBN:9781854114921)
is available to buy from: http://www.seren-books.com/books/p/2128/
Carrie's blog: http://carrieetter.blogspot.com/

David Johnson: ever popular international and local performance poet Bristol; Bath: USA wowed us with his astute and humourous take on life.

Dru Marland with her ever popular humourous haiku. Dru is an illustrator and photographer.  Here is a photo of Aika doing haiga: http://www.flickr.com/photos/belvedere/4605996750/
Also see photos of Hazel, and even myself with Karen Hoy!

Hazel Hammond read some of her poems from her forthcoming book "Needlepoint" due to be launched in Bristol on the 28th May: http://thetattooproject.co.uk/THE%20BOOK.htm

Lee Coombes, veteran of sell out Bath Fringe Festival events, and now working on a pilot TV series, ended the evening by providing us with raw belly laughs with his comic monologues and also showed us his Japanese tattoos. Catch his fast selling out event with Writing Events Bath!

Alan Summers was the Live Word Contact for this launch party: alan@withwords.org.uk

Rachel Carvosso is founder and co-organiser of the 2010 Bath Japanese Festival, and contact for visual artists: bathjfestival@gmail.com

The list of people to thank for making this so successful is very long. We'd love a comment about your support and involvement for Area 17 readers!

Thanks due to so many include:

Room Set up by BRSLI staff: Jonathan Taylor: Paul Browne; and lastly Bob Draper MBE who stayed past 10pm and did so many of those little things that are so vitally helpful.

Food and Drink: Supplied by Yen Sushi, and served by Karen Hoy and Tracey Kelly

Announcements, and bringing his own unique charm and humour: John Carvosso

All the exhibition people including Karl Jaeger (founding member of BRSLI); Fiona from Usborne Books; and to all those others who helped on the night!