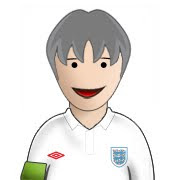 The Football Haiku World Cup is a project based on the writing of haiku
poetry specifically geared to the football World Cup in South Africa in
2010. We want to publish beautiful poetry written by you to accompany
the beautiful game.
==========================
CONTRIBUTE A FOOTBALL HAIKU
==========================
The basic question for the project is "What has the football World Cup
ever done for us?" based on the Monty Python question "What have the
Romans ever done for us?"
Writers are encouraged to send in a single football-related haiku that
they have written in answer to that question.
Writers from anywhere in the world are encouraged to send in work.
Writers can send in haiku in any language, though it would be helpful
to us if you can provide an English translation as well (but not
necessary). It is a World Cup, after all, which is as much a festival
of language as a festival of football.
Send us a single football-related haiku written by you to:  enter.haiku@gmail.com
Ffi: http://haikuworldcup.blogspot.com/
===================================
THE FOOTBALL HAIKU WORLD CUP TEAM
===================================
* Matthew Devereux, Woking, Surrey, England, has written "The Gambler: A Shakespearean-Dostoevskyian-Reiszian take on the 2010 South Africa World Cup"
* Alan Summers. Founder of With Words <http://www.withwords.org.uk>
* Tim Souster. A primary school teacher in London, England; reviewed
for "The Times Literary Supplement" and "The Financial Times".
* Timmy Killeen runs the English Football Post and is based in Galway, Ireland.
* Peter Ulrik Roeder is the author of "Game Over" and is based in Lyngby, Denmark.
* Adriana Piccardo, creator and administrator of a haiku group at Facebook and is based in Buenos Aires, Argentina.
* Roxana Elena Roseti is an editor on the Romanian newspaper Jurnalul National.
* Jon Greenbank writes for the English Football Post.
* Dick Whyte co-edits "Haiku News"
* Rob Scott is a haiku poet from Melbourne, Australia, currently doing his Masters thesis on the history of haiku in Australia.
* Dave 'Serjeantina' Serjeant fires out haiku, senryu and micropoetry thunderbolts at a site called Distant Lightning.
* Rishi Dastidar is a copywriter for ad agency in London and super incredibly brainy.
station approach
a man and his dog train
kick around a tin

Alan Summers
CONTRIBUTE A FOOTBALL HAIKU (AND HOPEFULLY GET PAID FOR IT) OR DOWNLOAD THE FORTHCOMING EBOOK: HOW THE PROJECT WORKS
The basic idea is very simple.
Firstly, there will be an ongoing ebook of the haiku we receive that can be downloaded. People downloading that ebook can choose to pay any amount that they like, based on the same funding model as the seminal Radiohead album "In Rainbows".
Once we have received a decent number of initial haiku, we can then offer the first version of the ebook for download. So please send your haiku to us as soon as possible.
After that, in the long-term, those haiku can be put together along with specially commissioned illustrations for a book that will be published and available in shops at a set price. We are interested to
hear from artists and designers.
Of the initial money that is received from those donating for the downloadable ebook, 25% will go to the small team orchestrating and editing the ebook.
25% will be paid equally to contributors of haiku that are selected to be part of the project. 25% will be provided as special prizes to the writers of the three haiku that are voted as the best by readers of the ebook.
The remaining 25% will be given to a football-related good cause voted on by contributors and readers of the ebook.
So if you contribute a poem or download the ebook, please also send over the name of the football-related good cause you would like to see money donated to enter.haiku@gmail.com.
If you are an individual or organisation that would like to become a partner or patron or supporter of the project, and would be able to contribute financially to it to help us make it happen (no matter how
small a contribution), please also contact us immediately at enter.haiku@gmail.com.
In exchange for your contribution we will provide you with a link in the ebook.
Please send us a single football-related haiku written by you to:  enter.haiku@gmail.com
Ffi: http://haikuworldcup.blogspot.com/
============================
Posted by Area 17 at 1:46 am