.
Haiku Jam - one of a limited edition series of six haiku jams each featuring haiku by Alan Summers with japanese translations by Hidenori Hiruta. 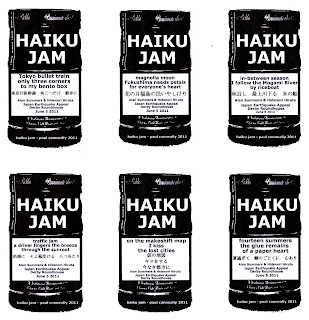 
This is a phototograph of one of a limited edition series of six jars of haiku jam created by artist poet Paul Conneally. 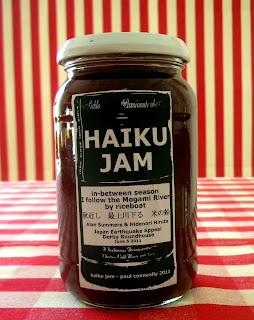 Each jar of haiku jam has a haiku by award winning haiku poet Alan Summers with a Japanese translation by Hidenori Hiruta (Akita, Japan) published on it.

This Haiku Jam series has been produced for the Japan Earthquake Appeal and will be available at Japan Earthquake Japanese Cultural Day at Derby Roundhouse on the 5th June 2011 11 am to 4 pm
A limited edition of Haiku Jam featuring haiku by award winning haiku poet Alan Summers with Japanese translations by Hidenori Hiruta will be on sale this weekend to raise money for the UNESCO Japan Earthquake Fund. There are six different haiku jams each with a haiku by Alan Summers on its label. The haiku jam can be eaten or just placed on a mantlepiece or shelf as a work of art made by cultural forager and artist poet Paul Conneally.

The haiku Jam will feature at the Japan Earthquake Charity Event at Derby Roundhouse this Sunday 5th June. The event is organised by The East Midlands Japanese Association, Derby Japanese School and Derby College. The Roundhouse is in Pride Park and the event will take place between 11am and 4pm. Click this link to see a poster about Japan Fundraising Event

Other featured activities on the day include Martial Arts, Origami, flower arranging and Sushi workshops and demonstrations; traditional Japanese sports competitions, Japanese refreshments and produce for sale, quizzes and competitions.

The Haiku Jam Series follows on from Conneally's art installation 'Snibston Preserves' for Transform Snibston at Snibston Discovery Museum. Summers and Conneally have worked together many times before and Conneally felt that Alan Summer's haiku were just perfect for the first haiku jam series:

"I was so pleased when Alan agreed to let me publish his haiku on the Haiku Jam jam jars. Alan's work is full of haiku spirit and exactly right for this project with its hope of raising money for and the spirits of those affected by the earthquake and tsunami in Japan"

Every single penny paid for the Haiku Jam will go directly to the UNESCO Japan Earthquake Fund via the East Midlands Japanese Society and the Derby Japanese School.

Brilliant idea, Alan ... wish you had been able to sell these at Hay!

[We visited the church at Vowchurch en route yesterday, where Lewis Carroll's brother had been incumbent ... and the jam on sale there looked good, too!)