Take Five: Best Contemporary Tanka Vol. 3. An anthology that provides a valuable snapshot of tanka in the 21st century. 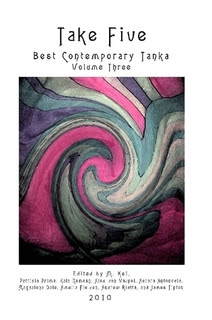 
I'm delighted to announce that some of my tanka are appearing in this anthology!

Take Five provides a valuable snapshot of tanka in the 21st century.

The result is Take Five : Best Contemporary Tanka, Volume Three, featuring tanka, tanka prose, and tanka sequences by 187 poets and translators from around the world.

With an introduction by editor-in-chief by M. Kei, and commentary by the editorial team,. Cover art by Aurora Antonovic.

is your copy OK? Mine had apostrophes instead of content on about 50% of pages

Have you contacted the editors? I haven't received my complimentary copy yet.

I contacted Lulu.com and they have asked me to provide a photo. I don't think it's questionable content because the index is unreadable.

Must be just a glitch with lulu. Do let me know if you get a mistake free copy.

I'm really pleased we appear together in this anthology. :-)

I have just heard from the editors and it is unfortunately, as I knew, a fault by the printers alone.

The editors are some of the very best in the world, and it must be highly frustrating for them to receive a clean proof and then the printers to produce a handful of faulty copies.

Personally I can't wait to receive my copy, and I congratulate the editors on such a fine anthology.

Hi Alan - It must be tremendously frustrating for them. I emailed a photo. Hopefully it will all get sorted one way or another. I'd look up your tanka, but the index is illegible. The following looks like one of yours though:

Wow, I didn't know I did conceptual tanka like that. ;-)

I haven't received my own copy, so waiting on that to photo example pages and send those photos to them.

It is indeed frustrating for the editors as they received clean proof copies.

I makes it very difficult to recommend lulu.com and I certainly wouldn't recommend them if they don't respect sending out clean copies after the proof was mistake clean.

They should replace your copy asap.

A lot of people in both the haiku and tanka community use lulu.com so it's a big area of customers that they are harming for their own business.

Just to let you know, after sending them a picture at their request, Lulu sent me a good copy in the end. It arrived today.

Has anyone received a good electronic copy? I noticed the e-book was supposed to be available at Barnes & Noble on June 28, but now the book is not listed on B&N or Amazon at all.

Do please let us know if and when it appears as an eBook at those places again. Many thanks for posting.

Just checked again tonight. Not available (that I can find) on Amazon.com or Barnes & Noble.

Alan, I gave up and finally purchased the .PDF download from LULU for $8.95 and was disappointed that the cover illustration(s) were not included. I didn't notice any typographical confusion, but the Search document function does not pull up words that are known to be in the file.