Haiku: The Keyhole Of Its Details David Briggs, with Alan Summers

Haiku: The Keyhole Of Its Details
David Briggs, with Alan Summers

AS: “I set David Briggs a challenge to talk about haiku, and write a few from my Slip-Realism criteria.”

DB: For me, the importance of haiku in Anglophone poetry lies not so much in discussion of the form’s metrical convention, or of what haiku is, but –– rather –– in what it does. And that is to hold our eye to the keyhole of its details, such that we see through its language into, well, the sublime. It’s that haiku feeling, that ‘stop-time’ moment, that ability of a perfectly-compressed image to cause a sudden shift in our way of seeing: to make us see through the slats of the outhouse door. Everest; or, the late-morning, many-angled sunlight reaching out to touch a bowl of cherries; perhaps, Autumn walking purposely through a cemetery.

Ideally, every well-turned image in a poem should aspire to recreate in the reader that hiaku feeling, and nowhere more so than at the ends of stanzas, the ends of poems. I want the end of a poem I write to leave an echoey silence like the few seconds of loudless sound following an organ crescendo that’s been suddenly cut short in a cathedral.

Many poets sine Pound have found haiku (and tanka) to be effective materials to use as the building blocks of a poem. Matthew Caley has used tanka to great effect in poems like ‘Between Women’ and ‘Squibs’, in his third collection “Apparently” (Bloodaxe, 2010), and the poem ‘Serendipity Ode’, from his second book, could be read as renku, a haiku sequence, with the unusual addition of a rhyming (or near-rhymed) final word in each stanza. Here a are a few of my highlights from that poem:

BT
would us believe
silence is a form of neurosis.

By cruel decree
the High Queen made a dozen servants weave
six neckties and six nooses.

Reputedly,
when Rimbaud had his leg removed
it sprouted roses.

By way of personal example, the opening poem in my first collection, ‘Twenty Below Zero’, might aslo be viewed (if I’m generous to myself) as a short sequence of ‘found’ haiku hiding in a ten-line poem:

After reaching the peninsula
we received a silver bullet,
edges flecked with powder, as a gift.

Steam from Turkish coffee
syrupped through our window
in the marbled night.

Wrapped in bear pelts we huddled
on the stone floor, turning it over
in our hands, memorising duels

we had fought on our way to the sea.

Similarly, in a poem called ‘Drought’ there’s another three-line sequence where I tried to compress an image in a style similar to that required of haiku:

Dust nourishing nothing;
swarming lightly through summer,
its porch steps and orange groves.

Here the kigo (or season word), “summer”, which is typically verdant, is given a different context, so as to set up the end of the poem wherein the protagonist, dust, keeps

expanding its Empire of Nil
among wheatrows, in gutters, in pithcraters.
Rain is either hearsay, or heresy.

The more I consider my poetry, the more I realise that I’m trying to build a body of poems structured around a series of interlocking, imagist tercets and couplets, striving always for a deft use of the down-stroke that’ll evoke that haiku feeling. To give a final example, at the end of a poem about the alarming number of suicides from Clifton Suspension Bridge, near where I live, I wanted to evoke the forces that compel people to such desperate straits, be they economic, familial, psychological, psychriatric, or whatever. The poem, which speaks to the reader in the second-person voice, describes the ‘you’ it’s addressing as having been drawn to the bridge, as though by a magnet, late at night, only to intone:

understand, finally,
that no-one jumps:
everyone is pushed.

It isn’t descriptive, it’s probably closer to being a moral or aphorism, and it breaks the haiku principle of presenting a moment without commentary, but I was trying, in haiku, to invoke a moment of altered perception through the detonation of a tightly-compressed grenade of language.

You’ll have your own views on whether or not I’m getting anywhere close but, hopefully, you’ll see why I think that haiku is, in many ways, the essence of poetry. Somehow, it’s what we’re all striving for, whether we know it or not.

wind gusts on Smallwater,
a skein of ashes,
mother and son turning home

AS: “It’s a beautiful haiku in those last two lines:

a skein of ashes,
mother and son
turning home

Allegorical yet literal, a flight of geese, and a person’s funereal ashes. We don’t need to know more:  It’s very incompleteness is heartbreakingly full of hope. I tingle reading those lines, and remain undecided over your original or my suggested version though I’m veering towards the original.”

“We often leave out words and phrases that another kind of poet would and should keep, and why not? I feel, on a personal level, that haiku works to enable readers differently. Haiku, to me, revolve around something like a wheel with its spaces between its spokes, and it’s those gaps that add to the particular counter-intuitive poem, to some, as its design (form).

Riverine shadows, a wonderful phrase adding to a hauntingness that haiku can be so good at as well.”

"I think I’ve already said, during our earlier conversation, most of what I’ve thought about the place of haiku in my writing practice, but I do think I should emphasise the importance of your editorial eye in shaping the ‘fishing-fly’ poem that appeared on Troutswirl.

As anyone can see from the last part of the interview that produced the poem, my initial version is more cluttered with detail, with clusters of sound-words like “whisk and tick”, and with the added complexity of the metaphor in the final line. It’s just busier all round. And I think that’s pretty distinctive of my writing generally.

Your stripped back (and I think superior) version shows me the value of letting in some air and some space. Of really stripping back to the essence of the image. Maybe, when I’m struggling with a line or section of a poem, it would be a good idea to imagine that it’s going to be carved in stone. Then I think I’d consider just how necessary each word really is. Perhaps this is the best discipline that haiku can teach any writer?"

Haiku: The Keyhole Of Its Details (David Briggs, with Alan Summers)

Welcome to re:Virals, The Haiku Foundation’s weekly poem commentary feature on some of the finest haiku ever written in English.

This week’s poem was: 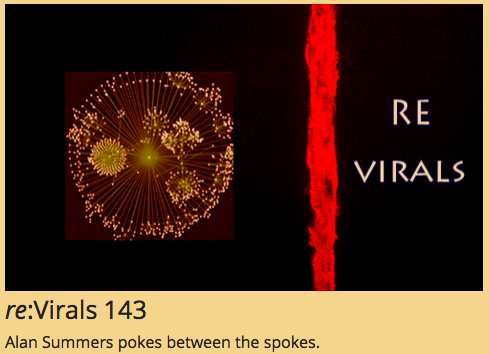