When haiku get complicated - an attempt to explain along with W H Auden’s Night Train and the Royal Mail, and an owl, of course 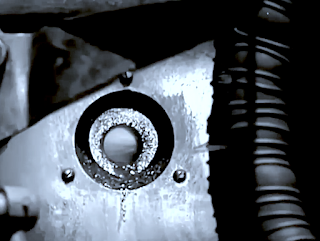 “When poets are in their writing zone, unusual images and symbolism occurs. We can’t always explain as it’s unconscious writing, a little like automatic writing.”

See also the Extras feature (further below) and how it's okay to be different from others, with more examples.

Well, here’s an attempt to explain this particular one:

Night trains have their own rhythm, where we are sleeping over, but on a long distance travelling train. We become owls prowling the night by rail, and owls are a potent symbol of the night. I’m also inspired by art that depict a surreal piece about a woman who is an owl. It’s purely imagistic, and part ekphrastic as well. But it also captures that ‘nightness’ of both that type of train travel, and the separation of day and night.

This one is certainly unusual, perhaps, but it's inspired by both art (paintings); and also deeply influenced by both NIGHT MAIL by W.H. Auden

and this documentary called Night Mail: 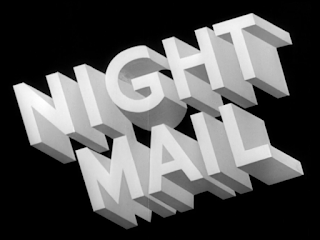 "Night Mail is a 1936 English documentary film directed and produced by Harry Watt and Basil Wright, and produced by the General Post Office (GPO) film unit. The 24-minute film documents the nightly postal train operated by the London, Midland and Scottish Railway (LMS) from London to Glasgow and the staff who operate it. Narrated by John Grierson and Stuart Legg, the film ends with a "verse commentary" written by W. H. Auden to score by composer Benjamin Britten. The locomotive featured in the film is Royal Scot Class No. 6115 Scots Guardsman."

"Night Mail premiered on 4 February 1936 at the Cambridge Arts Theatre in Cambridge, England in a launch programme for the venue. Its general release gained critical praise and became a classic of its own kind, much imitated by adverts and modern film shorts. Night Mail is widely considered a masterpiece of the British Documentary Film Movement." 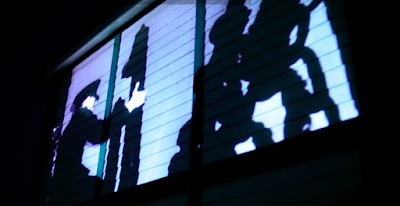 And I just discovered this wonderful band of musicians called Public Service Broadcasting and their various music films including this one:

And a wonderful remake using mostly model trains, and is quietly brilliant!
https://www.youtube.com/watch?v=7QfhZuv1Gw4 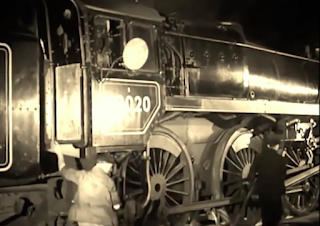 Both show the excitement and industry of the people who work through the "owl hours" to make sure society gets their mail, coffees in the morning for the early shift workers, construction workers, and later, on the office and various retail workers. 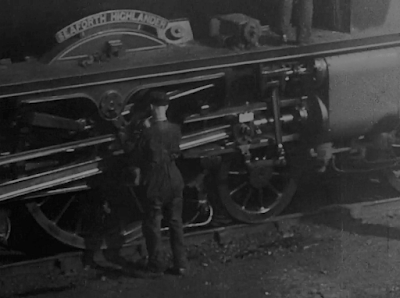 I actually had to deconstruct where I got my inspiration from, but it is my poetic interpretation, as I was one of those "owl workers" from time to time. One of those "invisible workers" helping to make the world tick along as it starts to stir.

So back to the Caledonian Sleeper train at Euston Station ready to take us to Glasgow. 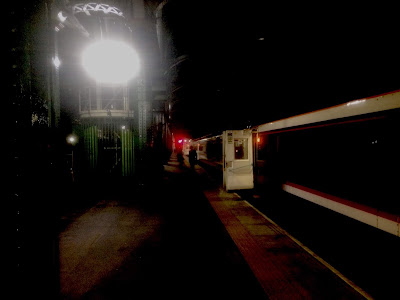 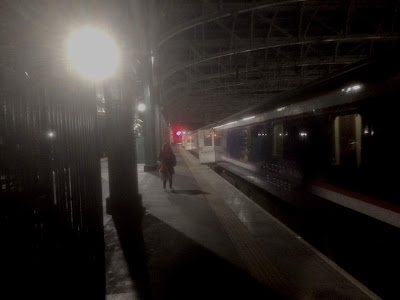 night train
The opening line, which acts as the anchor as it has a concrete image of a train at night, and more specifically, those overnight sleeper trains.

a window screams
Of course a window can't scream, although some can screech if you try to open one, perhaps at home, or embarrassingly somewhere else, where one is sticking.

out of an owl
The extraordinary continues with a window screaming out of an owl. We know this isn't possible, so we are moving into metaphorical land, and perhaps our, or certainly, my sub-consciousness. All those millions upon millions of direct and indirect, peripheral, images, sounds, and experiences from childbirth onwards, that the brain 24/7 incessantly collects and retains endlessly.

Of course owls make sounds, and one is actually called a Screech Owl, and here's another kind of owl 'screaming' into the night: https://www.youtube.com/watch?v=ZdnvASWVCNU 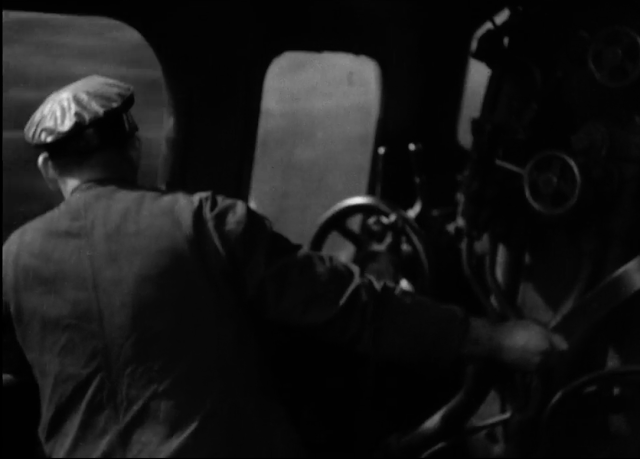 Of course there is no need to know my thought process, to know, or try to find out what the haiku is about, even, perhaps. This is just about working backwards as to why I might have written the poem.

And even just now, typing up my notes, I realise how we collect a massive catalog of sounds and images, often mashed up, from life, from television, movies, even books, to computers, and various soundtracks of music to live events. 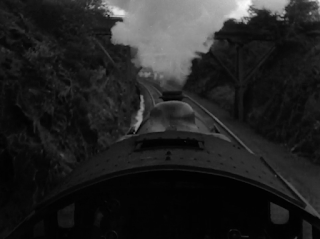 We have a labyrinth of visual and sound images competing against each other, all jumbled, and re-jumbled.

Including our different stages of sleep at night, to slowing surfacing through those stages to full wakefulness in the morning. And of course who hasn't been abruptly woken up by some strange noise in the middle of the night, that we cannot make sense of, and that experience is stored away in our brain too. 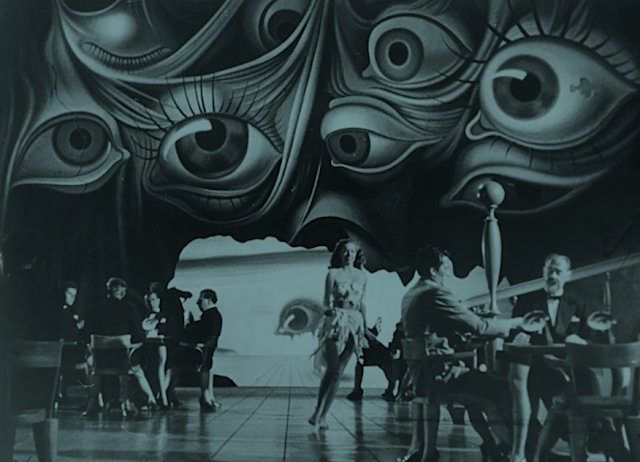 As a poet, this is all wonderful! Disturbing too, of course, but it is a storage for our poems. So when I reach out for a concrete image, from an actual experience, other images creep in. A train is full of windows, and in fact, our life is made up of windows. And the atmosphere of a sleeper train, with its own window, and the rhythm of the journey, going through the countryside, urban scapes, borders, will all have an effect on our sub-consciousness, and imagination.

I don't "know" why I wrote this poem, but I do know I was reaching for something outside a partnership of two concrete images this time. The poem just pulled me along, as did my unconsciousness, and sometimes two worlds collide, that of the everyday waking concrete world, and that of the pre-conscious:
Freud called it pre-conscious, or what some refer to as the subconscious. It is much larger than the conscious mind and accounts for around 50-60% of your brain capabilities.
https://psychologenie.com/difference-between-subconscious-unconscious-mind 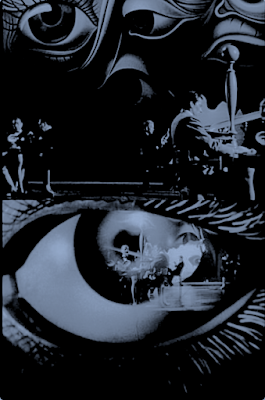 In my forthcoming book, I'll mention about a technique that can help anyone if they are struggling with a haiku, perhaps it's too matter-of-fact, or prosaic, or by directly stating the moments, or incidents, it's not saying more, not saying enough.

In the meantime, why not watch this lovely and romantic suspense movie, which had stage sets designed by Dali, look up Spellbound, directed by Alfred Hitchcock, it ends on a train journey:
https://en.wikipedia.org/wiki/Spellbound_(1945_film)
https://www.youtube.com/watch?v=Qku4jtvtay8

Why owls?
Because they are such strong symbols, and they are night creatures:

The scream, of the train whistle, perhaps even inspired by the 39 Steps movie:
https://www.youtube.com/watch?v=Mhp5SpTxQw8

And of course the great scene in Some Like It Hot
https://www.youtube.com/watch?v=fbQqnJw7xL0 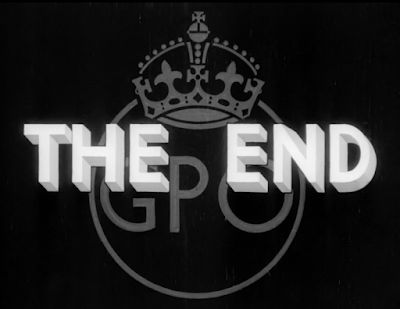 But not quite the end here, as we turn to a different haiku, although it involves owls, of course...

When day turns to night, it's a different empire. There is also the truth of the night, that owls know all about.

Extras
Why we can be different.

"Surrealism had a great effect on me because then I realised that the imagery in my mind wasn't insanity. Surrealism to me is reality."
John Lennon

Lennon has inspired millions, and his songs another year bearable.

"Surrealism, for me, is truth; it's naked integrity,
and it's the dust from my soul."
Alan Summers

Note:
The aural images outside Alan Summers’ window in Wiltshire, England, had all the makings of a painting by Rene Magritte (1898-1967):
https://www.artvilleacademy.com/studentcenter/art-around-the-world/why-magritte-was-fascinated-with-bowler-hats


sunlight slants
across the side of a fence
are footsteps lonely?

it’s a spider night
we huddle under stars
surveilling us


"It has always seemed to me that extreme clarity is surreal. It is a jarring experience to encounter the truth of nature. The inner life of Basho must’ve had strange orbits…how could such a penetrating vision be anything but surreal…one cannot kiss an angel with closed lips."


The Matsuyama Declaration, written by haiku poets who can hardly be considered radicals, suggested that haiku both ancient and modern had elements of surrealism:
http://fukiosho.org/archive/reference/Matsuyama_Declaration_English.pdf

In Chapter 3 of *Haiku Poetics in Twentieth-Century Avant-Garde Poetry* (Lexington Books, 2011) [“Haiku in France: From Couchoud to Eluard’s Surrealism”], Jeffrey Johnson posits that it was actually haiku and Japanese poetry that helped give birth to Surrealism, drawing on commentary from Kenneth Rexroth, William Schwartz, and Julien Vocance.

Some quotes from the intro to that chapter:
“Rexroth refers to condensation (no spare word), lack of syntactical connectives, visuality, and haiku juxtaposition. The association of modernist poetic experimentation and Japanese haiku was, in Rexroth’s phrasing, “a remarkable example of historical cultural convergence.” Furthermore, the reforms undertaken by the 1920s avant-garde in poetry exactly coincide with the awareness of haiku *as a distinct genre*—a process that began […] with translations around 1900.”

“ . . . Schwartz wrote in 1925, “The question is, what started the present tendency towards condensation in French poetry? If the germs did not come from contact with the ‘compressed’ and reticent poetry of Japan, to what other literary form can the tendency be traced?””

“During the teens and twenties in particular, haiku came to be increasingly associated with the poetics of radical juxtaposition and visual experimentation in France and elsewhere. Generally, Buson was considered essential to this visual association, and […] this dated from the time of Couchoud’s pioneering work. From Couchoud, to Neuville, to Vocance, and on to Eluard, haiku left its lasting mark on French poetics . . .”

The entirety of Chapter 3 is devoted to “tracing the trajectory” and haiku’s role in Surrealism.

Aspects of surrealism, are they in our dreams?

Dream Speak
Kirsten Cliff removes us from the diurnal with her gallery of poems from across the thin curtain of our waking
https://www.thehaikufoundation.org/2013/09/01/per-diem-for-september-dream-speak/

Alan
Call of the Page